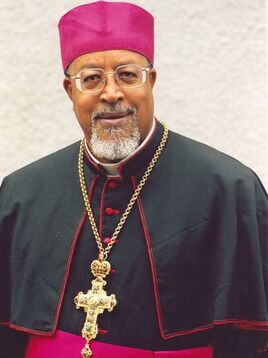 “Woe to the shepherds who destroy and scatter the sheep of my pasture!”

One of the most enigmatic and troubling questions that the Tigrayan Christian faithful have had to wrestle with in recent days has been the actions and stance of Cardinal Berhaneyesus Demerew Souraphiel.

Even before the beginning of the war on Tigray, on 4th November 2020,  the Cardinal’s stand in relation to the political turmoil within the country was very puzzling.  His actions and choices at various important junctures seemed to be oblivious to his pastoral responsibilities as a clergyman and the highest representative of the  Roman Catholic Church in Ethiopia. His Eminence seemed to not only chose to associate with and identify with the politicians of the day but to also repeat and affirm highly politicized and divisive narratives both through his own public addresses and through his participation in politicized associations and public events intended for propaganda purposes.

In doing so Cardinal Berhaneyesus has not only been unable to speak truth to power to voice the injustice and the misery that has beset the country and the flock that he has been appointed to be a shepherd over but he has not even seen it fit to recuse himself from the company of those doing the gravest injustices. This terrible failing to do the minimum of what is expected from a religious leader has become even more glaringly obvious in the stance Cardinal Berhaneyesus has adopted in relation to the ongoing war in Tigray.

At the very outset of the war, many were shocked when the Ethiopian Reconciliation Commission – chaired by the Cardinal declared that any calls for negotiations from the TPLF ‘junta’ (the derogatory label given to the main political party and leaders of the Tigray region) were unacceptable and by issuing a statement of support for the war. This statement was notable not only because it came from a commission set up with the express aim to achieve alleged national reconciliation declaring opposition to peace negotiations but also because that commission was chaired by a Cardinal of the Catholic church.

In the six months since this statement the war on Tigray has devolved into a genocidal attack involving mass atrocities and the weaponization of hunger and sexual violence to annihilate the people of Tigray – including tens of thousands of Catholic faithful – and yet the Cardinal and by extension, the Catholic Church of Ethiopia remain silent and indifferent. Not even a desperate letter written by His Eminence Abune Tesfaselassie Medhin bishop of Adigrat on 5th January 2021 illicit a pastoral response from Cardinal Berhaneyesus.

In fact, as a group of Tigrayans living in the US recently indicated in a letter, addressed to His Holiness, Pope Francis the Cardinal has repeatedly acted with lack of responsibility, wounding the feelings of the people of Tigray and especially the thousands of Catholics, living in the region, both with his actions and omissions.

But why? Why has the Cardinal consistently chosen to stand against the people of Tigray? What makes him fail to openly condemn a full-blown genocidal war that is still ongoing and that has already resulted in unimaginable human misery? Even worse, how can a religious leader that has been charged with the role of the shepherd of ALL the catholic flock in the country commend a war that has led to the suffering of those he has been charged to nurture?

Some may argue that the Cardinal is simply not aware of the consequences of his actions and speeches. This, however, would be not only naive but far from true as can be confirmed from the Cardinal’s recent response (March 31, 2021) to a letter written to him by an Eritrean Catholic bishop.

An Eritrean Catholic bishop (Abune Kidane), who – in what appears to be an email sent on the 27th of January 2021 noted that he was “deeply concerned and saddened about what is going on in Tigray” and asks the Cardinal to “stand up and be the voice of the badly suffering part of Ethiopia which is trodden under different foreign forces.”

There are several elements about Cardinal Berhaneyesus’ response to Abune Kidane’s email, seen in the image below, that are worth highlighting.

Firstly, what we note is the length of time that elapsed before he responded to the bishop’s email. It took the Cardinal almost two months to respond to the concerns of the Eritrean bishop. Why did the cardinal take all the time? Taking two full months to respond to such grave concerns and a heartfelt plea from another man of God is puzzling, to say the least.

Secondly, the Cardinal’s response seems to have been made public intentionally. As far as we can tell the Eritrean bishop seems to have sent the email in a private address. Whereas, the Cardinal’s response seems to have been made public thus intentionally allowing the email correspondence between the Eritrean bishop and the Cardinal to be freely circulated. So, again we are forced to ask another question as to the intentions and motivations of an action seemingly taken by His Eminence Cardinal Berhaneyesus: why did he choose to publicly respond to an email written to him privately? Why was it necessary to make it public? One needs to remember that the Cardinal’s email dates to a time before the Eritrean government publicly admitted that it is involved in the war in Tigray. It seems impossible to think that the Cardinal would be unaware that making this letter public would endanger the Eritrean Bishop. We can therefore surmise that even if the Cardinal did not specifically intend to harm his fellow minister of God he nonetheless was indifferent to all possible consequences of publicizing the email.

Thirdly, while these two points on their own are quite concerning, we find the actual content of the Cardinal’s response, which is deeply disappointing and even alarming. To the Eritrean bishop’s simple and sincere questions, the Cardinal confidently responds that “the Catholic Bishops Conference of Ethiopia was the first to make her statement.” He also proudly writes of his request for prayers from the Holy Father, Pope Francis. Our question for him is: were these things enough? What were his responsibilities to his flock in Tigray as both a religious father – the preeminent representative of the Catholic Church in Ethiopia and the Chairman of the “Ethiopian Reconciliation Commission”?  It is our purpose here to remind the Cardinal that the people of Tigray and the world expected the Ethiopian Catholic Church that he is representing to live up to her Christian commitments and responsibilities to peace, truth, reconciliation, justice, and the protection of the most vulnerable amongst us.

The Cardinal also mentions in his email that he sent a delegation to “Mekelle and Adigrat on the 12-14 January 2021.” Though this is indeed a laudable act by itself, the outcome could have been much better. At least, we would have expected to hear an objective report that honestly addresses the atrocities being committed and identifying the perpetrators including by noting the reality of Eritrean involvement of the ground which was being denied by both governments at the time. Unfortunately, the report by the delegation seems to intentionally leave this along with the extent and severity of the suffering of the people of Tigray in its report. An unconfirmed rumor even suggests that this was done at the express wish of Cardinal Berhaneyesus.

Finally, in his response to the Eritrean bishop, the Cardinal asks “if the Eritrean Catholic Church has done anything”. And “If, yes, let us know.” It is difficult to imagine that he was unaware that the Catholic Church in Eritrea was one of the first entities in the world to strongly condemn the war in Tigray. From the beginning, the Eritrean bishops have consistently raised their voices on behalf of the suffering and the innocents. Sadly, we do not see such a heroic response from the side of the Cardinal, where much is expected.

So, we come back again to our initial questions: What made Cardinal Berhaneyesus stand against the people of Tigray? Why did he fail to condemn state-sponsored starvation and sexual violence in Tigray?

We may not get immediate answers to these questions. However, these questions will force us to believe that either the Cardinal has become an instrument and accomplice of politicians or he has also fallen victim to the ethnic bias and hatred that is disintegrating the country.

Yet, as the Eritrean bishop seems to have reminded him in his email, Cardinal Berhaneyesus will be “answerable before God” and the people of Tigray will never forget how much he and through him the Ethiopian Catholic Church has let them down.

“Blessed are the peacemakers, for they will be called children of God” (Matthew 5:9).

Written by a peace lover from Tigray

Hibuan (ሕቡኣን) , which literally means 'the hidden', is a generic name for all who prefer to remain anonymous.

“The war is with the people”: A brief summary of an interview with a recently fired Tigray interim admin official and another Arena official.