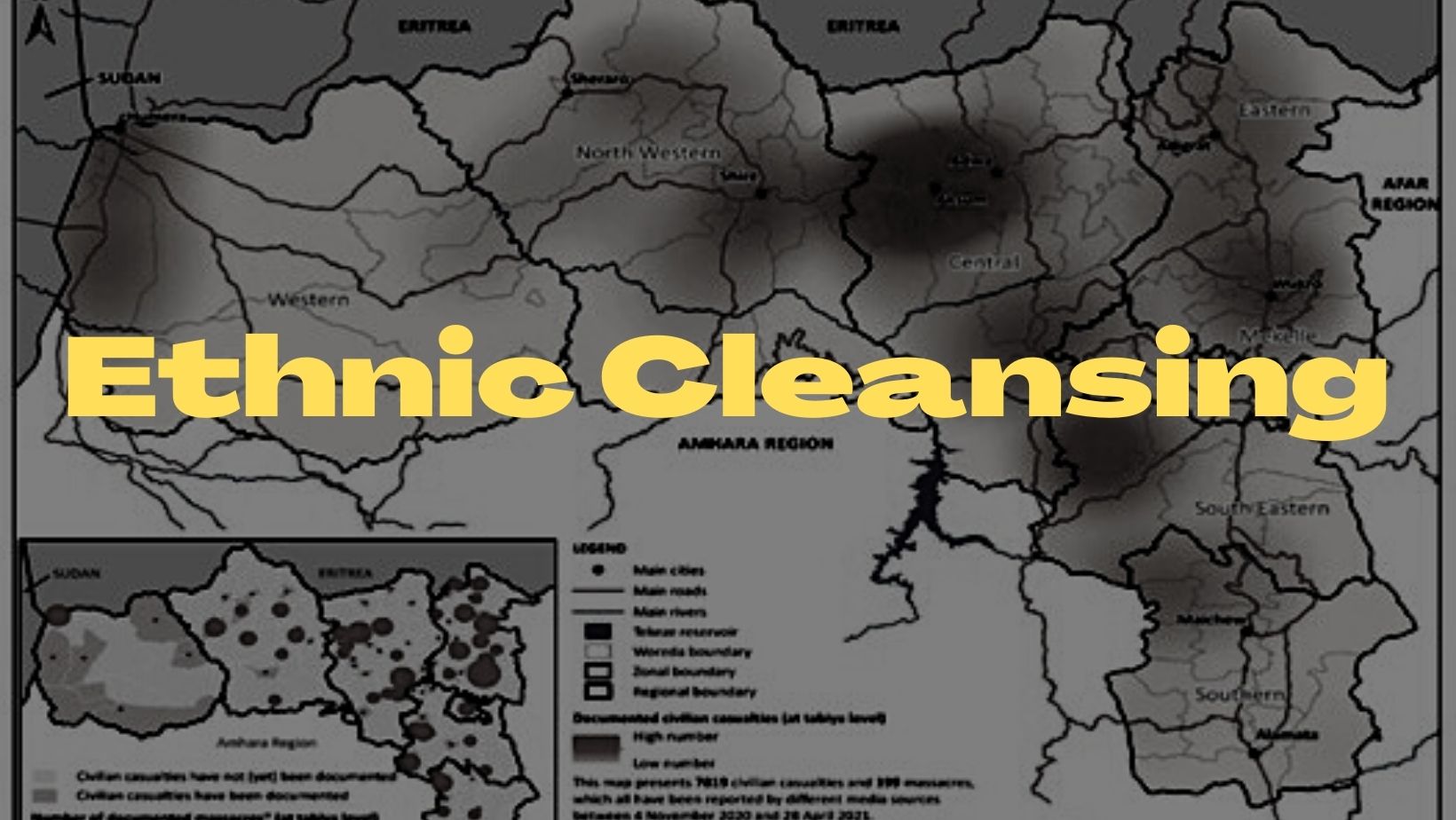 By Saba Mah’derom and Dawit Nerea

“Do African lives not matter?” asked Linda, United States ambassador to the United Nations, in a United Nations Security Council meeting. This is a question that needs repeating and reflection.

The world is certainly not short of evidence regarding what has been happening in Tigray for the last six months, specifically the ongoing ethnic cleansing in Western Tigray. However, it is increasingly evident that there is a lack of political will from international actors to take meaningful action that goes beyond periodic statements of concern.

Ethnic cleansing has been unfolding in Tigray since November of 2020. Abiy Ahmed Ali, Prime Minister of Ethiopia, sent troops to Tigray in November, 2020 after accusing the leadership of Tigray People’s Liberation Front, elected government of Tigray, of coordinating an attack on the Northern command of the Ethiopian military stationed in Tigray. Despite declaring victory shortly after, November 28, 2020, the war is still going on.

Multiple armed actors, such as the Eritrean Defense Forces and Amhara regional forces, have allied with the Ethiopian government in its military offensive against Tigray. Along with this offensive, particularly in Western Tigray, Amhara expansionist groups have used the war as an opportunity to drive Tigrayans out of their homes and annex the area into the Amhara region. These acts were referred to as “acts of ethnic cleansing” by U.S Secretary of State Anthony Blinken.

According to United Nations’s Commission of Experts, the definition of ethnic cleansing includes “coercive practices used to remove the civilian population” and “can include murder, extrajudicial executions, rape, and sexual assaults, deliberate military attacks or threats of attacks on civilians and civilian areas, destruction of property, robbery of personal property, attacks on hospitals, and medical personnel.”

All of these horrifying acts included in the definition of ethnic cleansing have been committed in Western Tigray.

As reported by UNHCR, since November 2020, 63,125 people have been displaced to neighboring Sudan and UNOCHA reports 631,775 have been internally displaced. As indicated in the displacement maps, the majority of these displacements are from Western Tigray.

In December, 2020, Stijn Vercruysse, the first and only international journalist allowed to travel to western Tigray, documented the half-empty villages and said “where did the Tigrayans go? It’s hard to find them. If they’re there, they feel haunted and wish to remain anonymous.” An elderly man in the village also said “after the war, Tigrayans’ houses were set on fire at midnight.”

Tigrayan refugees in Sudan that fled these areas also shared similar testimonies. Some even showed the physical scars – gunshot wounds, deliberately damaged genitalia, and welts on beaten backs – they sustained at the hands of government-allied forces, Amhara forces. Various tactics are used to drive Tigrayans out of their homes leaving all their belongings. Abebe Gebrehiwot, deputy head of the interim administration appointed by the federal government, indicated the use of gunshots (including on children), leaflets with threatening messages, and intimidation to leave the area. In some instances, people were forcefully put into buses. In areas where Tigrayan residents remain, reports show that Tigrayans are asked to claim an Amhara identity to have their home back and are handed Amharic IDs by authorities from the neighboring Amhara region. These same perpetrators, Amhara forces, also used the same means, use of leaflets to send threatening messages, harassment, and killings in the Amhara region.

The Tigrayans that still reside in what is left of their villages and towns are met with murder and extrajudicial killings, weaponized sexual violence, destruction of villages and towns, and weaponization of basic services.

Even though the total toll on civilian casualties is yet to be known, researchers documented a “high number” of casualties in western Tigray as seen on the right. These extrajudicial killings throughout Tigray are not happening in isolation but in a coordinated manner and are coupled with other horrific acts of weaponized rape and sexual assault to indicate intention.

The use of sexual violence as a weapon of war is another important element of the war. Survivor testimony from those who had fled Western Tigray into Sudan reveals that perpetrators told their victims that they were being raped to cleanse the Tigrayan bloodline and Amharanize them. This is another part of the systematic ethnic cleansing of Tigrayans.

Additionally, the acts of ethnic cleansing on Western Tigray utilize the destruction of villages and towns.

Satellite images obtained from google earth – as seen above – accurately depict and support reports that there is an ongoing systematic destruction of homes of civilians. MSF has also reported the destruction of healthcare facilities and looting of ambulances and medical supplies in North-Western Tigray. This has meant that not only are residents fleeing to Sudan for safety but in instances where they stay in their homeland, they are left with no home or resources to sustain their livelihoods.

The destruction of resources to sustain livelihood goes beyond the attack on villages. There is an anti-farming campaign wedged on Tigray that uses looting of food storages, farming materials, and farming seeds obtained through aid. In addition, there is looting and slaughtering of livestock. Abebe Teklehaimanot mentioned farmers being told they cannot farm the land and that it does not belong to them.

In line with the land ownership rhetoric, those in support of these human rights violations that fit the definition of ethnic cleansing on all counts have attempted to dismiss and/or justify the heinous acts by pushing narratives about decades-old land disputes.

This justification was first articulated by Gizachew Muluneh, the Amhara regional spokesperson. He made this remark in response to the confirmation of the ongoing ethnic cleansing issued by U.S Secretary of State, Antony Blinken. Gizachew dismissed all allegations of ethnic cleansing and denied the presence of Amhara forces in Tigray saying “there are not any Amhara forces in Tigray region. These areas are not Tigrayan areas in history. If the Secretary [Blinken] is talking about these areas, these areas are not Tigrayan. Our forces are not in the Tigrayan areas, rather our forces are in the Amhara region. That is our response.” This is a convoluted argument that denies ethnic cleansing and occupation by illegal and unconstitutional annexation of lands.

Moreover, even if one is to take this argument for disputed lands seriously, contrary to the claims made by spokesperson Gizachew, the Ethiopian map from 1978 shows areas of western Tigray as part of the land included within the Tigray border. A book, ‘Class Struggle and the Problem in Eritrea’, prepared by Dergue and published by Ethiopian Revolution Central News Disseminator designated the areas as Tigray. The very names of the contested towns in Western Tigray are Tigrinya attesting that these places are from time immemorial. Just examples of this are Mai Kadra which translates to ‘Kadra water’, and Tselemti translates to ‘blacks’.

In any regard, whatever opinions or legal arguments may or may not exist concerning the ownership of these lands, what is inarguable is that what is occurring in Western Tigray is ethnic cleansing accompanied by brutal force and terrible atrocities against the civilian population. An estimated 1 million people have been dispossessed, robbed of their livelihood, and left without the basic facilities necessary for survival. Taken together this amounts to crimes against humanity.

The mounting evidence has left no room for doubt as to whether there is a need for a swift intervention to stop the bloodshed in Tigray. It is the international community’s moral obligation to uphold its values by using all leverage to end the ethnic cleansing and hold perpetrators accountable.

Saba Mah’derom is a Tigrayan who has been advocating and closely following what has been going on.

Nerea is a graduate student at the University of Wisconsin and currently doing his share of online activism through campaigns to help stop the war on Tigray.