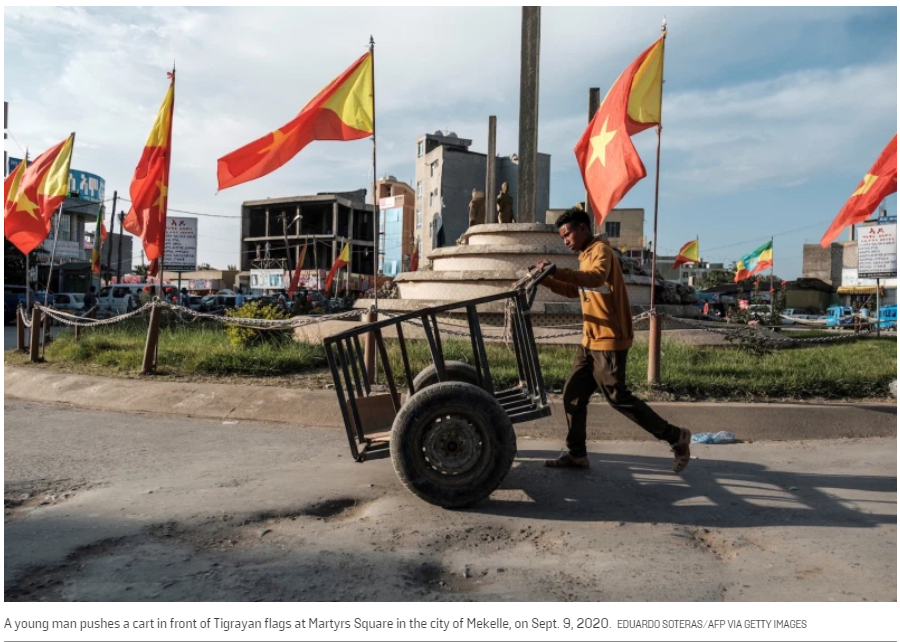 Teferi Mergo, an assistant professor of economics at the University of Waterloo in Canada, views the current conflict in Ethiopia as a manifestation of the long-running clash between two opposing visions for the country. One camp (this includes Abiy and his supporters) fosters the view that a strong central government is the only guarantee for the unity and territorial integrity of the country. The other—notably the TPLF and the Oromo Liberation Front (OLF)—advances the idea that political power should be devolved from the center to the peripheries in a federal system granting regions significant autonomy. The clashing visions are essentially contestations over history and memory.

The war can be viewed as a continuation of the ongoing undeclared conflict between the Ethiopian army and the Oromo Liberation Army in Oromia. Despite Abiy’s self-identification as an Oromo, Oromia has been a hotbed of opposition to his agenda of putting Ethiopia first at any cost.

External forces fail to understand the deep historical roots of the current divisions in society. Ethiopia is a case study demonstrating how the short-term political objectives of politicians in powerful nations have constrained the desirable goal of seeking long-lasting solutions for the structural problems bedeviling the country.

The U.S. government has shown significant deference to the unitarist camp and its political objectives, but this has only complicated the core contradictions of the Ethiopian state, deepening the chasm between the unitarist and federalist forces in the country. The U.S. can wisely use its vast financial and diplomatic assets as leverage to induce the two sides in the conflict—the Ethiopian government and Amhara political forces on the one hand, and federalist forces (particularly the TPLF and the OLF) on the other—to sit down and hammer out a lasting solution to the country’s long-standing problems. It is vitally important for the newly minted U.S. foreign-policy team to rigorously reexamine the United States’ long-standing foreign policy toward Ethiopia if it aims to avoid a Yugoslavia-type disaster in the Horn of Africa.

In the following excerpt, John Cherian provides additional details, sometimes inaccurate such as when he wrote: “Abiy took over from Haile Marriam Desalegn, a Tigrayan who had succeeded Zenawi.” I summarize some of the points he raises.

Ethiopia is once again in danger of careening into an all-out civil war. From the point of view of the government in Addis Ababa, the TPLF leadership raised the banner of revolt when it unilaterally held elections in October in the Tigray province. The central government had postponed all provincial elections citing the spread of the pandemic in the country. The Ethiopian parliament stated in its resolution that the Tigray leadership had “violated the Constitution and endangered the constitutional system” by holding the election.

A year after coming to power, Abiy formally dissolved the EPRDF and created a new political grouping, the Prosperity Party. The TPLF, already marginalised by the other constituents of the EPRDF, refused to join the new party.

The last two years witnessed a backlash against Tigrayans. Tigrayans living in the capital and other cities were targeted. More than 1,00,000 of them were forced to flee to refugee camps. Abiy has not been able to control the escalating ethnic strife. Around 150 ethnic clashes were reported this year alone.

Before Abiy ordered the Ethiopian army to move against the TPLF, he sacked the army chief, the head of security, and the country’s Foreign Minister, all Tigrayans. The head of the World Health Organisation (WHO), Tedros Adhanom Ghebreyesus, is also a Tigrayan and had served as a Minister of Health in Ethiopia. The Ethiopian government is now accusing him of being a lobbyist for the TPLF and Tigrayan separatists.

The TPLF leadership viewed the rapprochement with Eritrea with suspicion. The Tigrayans claimed that the government was conspiring with Eritrea against them.

The conflict in Ethiopia remains far from over, despite Abiy’s claim that military operations are complete. We are deeply concerned by reports of Eritrean refugees in Tigray being killed, abducted and forcibly returned to Eritrea by Eritrean forces. The State Department has also reported that Eritrean soldiers are present in Tigray. The internationalization of this conflict poses a threat to U.S. interests in the strategic Red Sea region, and could drive the Horn of Africa into a protracted crisis.

We join others from the international community who have urged Ethiopia’s federal government to abide by its commitment to grant security for humanitarian workers and full access to the 96,000 Eritrean refugees in Tigray, in addition to the over 2.3 million in children in need of humanitarian assistance. We also call for an independent investigation into these claims of forced return, and demand accountability for those who have violated international law. Finally, we extend our sincere condolences to the families of the humanitarian workers from the IRC and the DRC who were killed in this conflict. We are deeply saddened by the untold number of lives taken by this needless conflict.

We call on the Administration to engage the Government of Ethiopia, the Tigray People’s Liberation Front, and the region to end the violence and further human suffering, and consider targeted sanctions on any political or military officials found responsible for violations.

Ethiopia offered a 10 million birr ($260,000) reward for information on the location of fugitive leaders of a rebellious force in northern Tigray region. The money for helping capture heads of the Tigray People’s Liberation Front (TPLF) was announced on state-run broadcaster EBC and tweeted by a government task force.

Sudan’s army chief toured a border region with conflict-hit Ethiopia, according to a government source, a day after the military said troops were ambushed there by Ethiopian forces. General Abdel Fattah al-Burhan, who heads the armed forces and the Sovereign Council, “has arrived in Gedaref for a security visit.”

A foreign ministry spokesman in Addis Ababa told AFP Ethiopian security forces had “repelled a group of (Sudanese) low-ranking officers and farmers, who had encroached on Ethiopian territory.” Sudan has been flooded by an influx of Ethiopian refugees fleeing a conflict in the northern Tigray region that broke out last month.

Abiy Ahmed played down clashes between Sudan and Ethiopia. “The gov’t is closely following the incident with local militia on the Ethio-Sudan border. Such incidents will not break the bond b/n our two countries as we always use dialogue to resolve issues. Those fanning discord clearly do not understand the strength of our historical ties.” Abiy said in his tweet. His response came after Sudanese Prime Minister Abdalla Hamdok said that “Ethiopian forces and militias” attacked a military patrol inside Sudan.

Global Churches mourn Tigray death and displacement. In a pastoral letter to the Churches and people of Ethiopia, Dr Idowu-Fearon and other church leaders around the world say: “We join you in grieving for the deaths, injuries, displacement and divisions resulting from the tragic conflict in the northern part of the country. We are deeply concerned about the hardship and loss inflicted on the civilian population, especially the most vulnerable including women, children and the physically challenged. …[T]this conflict has added heavily to the constellation of concurrent crises already afflicting the people of Ethiopia — including the attacks targeting specific ethnic and religious groups, regional tensions associated with the Grand Ethiopian Renaissance Dam, the worst locust plague in 25 years, serious impacts on food production, and the Covid-19 pandemic.

The Horn of Africa Civil Society Forum Report on Tigray