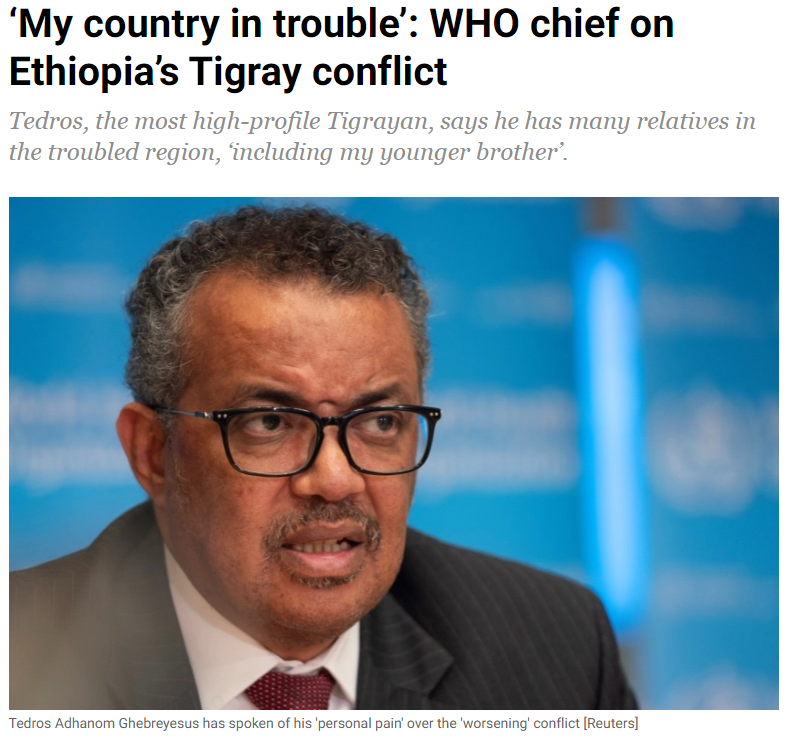 ‘My country in trouble’: WHO chief on Tigray conflict

One of today’s top stories related to the war on Tigray is Tedros Adhanom’s rare personal comment which has been reported by Aljazeera, France24 and Today News Africa.

WHO chief Tedros Adhanom Ghebreyesus has spoken of his “personal pain” about the “worsening” conflict raging in his home country of Ethiopia.

“In addition to COVID, 2020 has been very difficult for me because my country is in trouble,” Tedros told reporters in the UN health agency’s last news conference of the year on the pandemic.

Tedros, the world’s highest-profile Tigrayan, said he had many relatives in the troubled region, “including my younger brother, and I don’t know where they are. I have not communicated with them because communication is not there. As if COVID is not enough, I have that personal pain also. I worry about the whole country. I cannot worry about my younger brother or my relatives alone because the situation is worsening.”

‘I would never go back’: Horrors grow in Ethiopia’s conflict

Tewodros Tefera, doctor-turned-refugee, examines the wounds of war: Children injured in explosions. Gashes from axes and knives. Broken ribs from beatings. Feet scraped raw from days of hiking to safety.

Guesh Tesla, 54, said some 250 young men were abducted from a single village, Adi Aser, into neighboring Eritrea by Eritrean forces. He saw dogs feeding on the bodies of civilians near his hometown of Rawyan, where Ethiopian soldiers beat him and took him to Humera. He was taken to a courthouse turned into a “slaughterhouse” by militia from the Amhara region. He heard the screams of men being killed, and managed to escape by crawling away at night.

“I would never go back,” Guesh said. He left his wife and three children behind a month ago. Now, like many refugees torn from their families, he doesn’t know if they are alive or dead.

Abrahaley Minasbo, 22, said Amhara militia members dragged him from his home in Mai-Kadra on Nov. 9 and beat him in the street with a hammer, an axe, sticks and a machete, then left him for dead. Scars now slope across the right side of his face and neck.

Gebremedhin Gebru, 65, was shot while trying to run from Amhara militia members in his town of Ruwasa. He said he lay there for two days until a neighbor found him. People “will be hit if they are seen helping” the wounded, Gebremedhin said.

Eritrean forces have joined the war in Tigray, and have rampaged through refugee camps committing human rights violations, officials and witnesses say.

At Hitsats, home to a sprawling refugee camp of 25,000 Eritreans, Eritrean soldiers burst into the camp on Nov. 19. Mayhem quickly followed — days of plunder, punishment and bloodshed.

It looks like the much-lauded peace deal between the former enemies in fact laid the groundwork for them to make war against Tigray, their mutual adversary.

“Abiy has invited a foreign country to fight against his own people. The implications are huge.” Awol Allo

Mr. Abiy’s campaign has been led by a hodgepodge of forces, including federal troops, ethnic militias and, evidently, soldiers from Eritrea.

Eritrean soldiers looted aid supplies, stole vehicles and set fire to fields filled with crops and a nearby forested area used by refugees to collect wood, aid workers said. The camp’s main water tank was riddled with gunfire and emptied.

Their accounts are supported by satellite images that show large patches of newly scorched earth in and around the Hitsats camp.

Later, soldiers singled out several refugees, bundled them into vehicles and sent them back across the border to Eritrea.

Those [Abiy’s] denials have been met with incredulity from Western and United Nations officials.

But that veil has slowly lifted in recent weeks, as witnesses fleeing Tigray or reaching telephones have begun to give accounts of the fighting, the toll on civilians and pervasive presence of Eritrean soldiers.

In interviews, some described fighters with Eritrean accents and wearing Ethiopian uniforms. Others said they witnessed televisions and refrigerators being looted from homes and businesses. A European official said some of those stolen goods were being openly sold in the Eritrean capital, Asmara.

“How did we let a state that is hostile to our country come in, cross the border and brutalize our own people? This is an epic humiliation for Ethiopia’s pride as a sovereign state.” Tsedale Lemma

In fact, the biggest winner so far may be his Eritrean ally, Mr. Isaias. Mr. Abiy and Mr. Isaias remained close, bonded by their shared hostility toward the rulers of Tigray.

Without immediate access, Tigray will soon face a humanitarian disaster. Tigray was already grappling with swarms of locusts and recurring drought.

At Shimelba camp, Eritrean soldiers beat refugees, tied their hands and left them under the sun all day.

“They poured milk on their bodies so they would be swarmed with flies.”

The soldiers rounded up 40 refugees and forced them to travel back to Eritrea.

A Reuters cameraman, Kumerra Gemechu, was arrested in Addis Ababa on Thursday and will be kept in custody for at least two weeks, his family said. He has not been charged.

Kumerra’s arrest follows government pressure on journalists for some international news outlets which have been covering the conflict in Tigray region.

Kumerra covered the Tigray conflict, but Reuters was unable to determine whether his arrest was connected to his work. Government officials did not respond to questions from Reuters about whether his coverage was at issue.

“We stand by our reporting on the conflict in the Tigray region and will continue to report on Ethiopia with integrity, independence, and freedom from bias, as we do all around the world,” Reuters said in a separate statement.

CPJ said Kumerra’s detention was “the latest example of how press freedom is fast eroding under Abiy Ahmed after a short-lived hope of reform.”

Mekelle on the Day of Shelling, First-hand Accounts of the War on Tigray (Part 1)

Why We Don’t Agree on What We have Seen