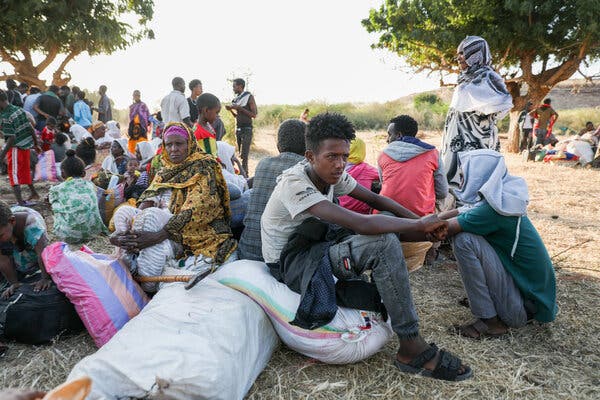 This is a summary from a preprint paper by Jan Nyssen. The paper first notes the closure of services, starvation and denial of humanitarian aid, massacres, destruction and looting and then proceeds to assess the situation in Tigray from multiple perspectives: civilian toll, geographical area, military, diplomacy and destruction of assets.

Civilian toll of the war on Tigray

The paper mentions killings, looting, destruction In Shire, Workamba, Wukro, Abiy Addi, Adigrat, Adwa, Aksum, Idaga Hamus and Mekelle. Massive abuses have resulted in clear trend in the Tigray public opinion: “I will go to the mountains and join the fighters”.

The paper quotes Michelle Bachelet as saying “artillery strikes on populated areas (in Humera and Adigrat), the deliberate targeting of civilians, extrajudicial killings and widespread looting” which she says “are likely only the tip of the iceberg”

According to the paper, the major reason for disrupted telephone and internet services, as well as impeded access by international aid and media are that it expose the heavy presence of Eritrean soldiers, something Ethiopian authorities deny.

Adigrat is one of the heavily attacked by joint Ethiopian and Eritrean troops. The Catholic Archbishop of Ethiopia is missing. Civilians are shot at on an individual basis and sexual violence takes place at large scale by ENDF (Ethiopian National Defence Force) and Eritrean troops. Eritrean soldiers killed 59 civilians inside their houses in Zalambessa, 8-15 people at Addis Pharmaceutical Factory in Adigrat, 8 in Hawzen, 80 in Maryam Dengelat, 24 men in the village of Abraha Atsbaha, 13 boys in Tokot, and 750 in Aksum. Eritrean soldiers also drove a pick-up truck with machine guns through the central street of Adigrat and shot indiscriminately at shops, private residences, and passersby.

Wukro has been looted, including St Mary College and the Catholic missio, the Sheba Leather Factory has been destroyed and local youth who were protecting the place were killed in large numbers.

Mekelle serves as window dressing for the Ethiopian government, trying to convince its own public opinion that the situation is under control.

Harvest is in jeopardized. The situation for the harvest looks worst (1) in South Tigray because of very strong damage by locusts; (2) in Western Tigray, there are Amhara and Eritrean soldiers all over the place, nobody is harvesting their crop; (3) in places along the main roads.

The Transitional Tigray government mentions that there are approximately 2.2 million internally displaced persons, and 4.2 million people would need humanitarian aid (70% of the population). International aid workers who visited Shire in Northwest Tigray use the word “famine” (off-the-record). Reliefweb also indicates that there are more than 2.2 million affected people in Tigray alone.

Such assessments build upon the knowledge of antecedent rainfall,33 as well as vegetation status throughout the year (GIS analysis), combined with information on locusts, and the more difficult part, related to the war: the large number of internally displaced people, economic breakdown, and difficulties of access. We are setting up a technical group to work on this.

According to diplomatic sources, any international organisation that reports conditions that do not fit with the official government “Fact check” is rapidly declared ‘persona non grata’ and expelled from the country. According to the same sources, the UN Resident Coordinator has also been threatened with expulsion.

In addition to the war with Tigray, and the longstanding conflict in Somalia, the ENDF has become involved in several other recent conflicts; analysts mention increased risks of break-up of the Ethiopian state.

In extremely diplomatic terms, the council of the European Union has again expressed its concerns about the humanitarian situation in Tigray. Individual countries (Ireland, Belgium, Sweden, …) mobilised funds and have insisted that humanitarians should be granted access to all parts of Tigray, and the direct EU contributions to the Ethiopian budget have been cut by 90 million euros. Nevertheless, trade relations tend to continue unabatedly, and Ethiopian Airlines is not challenged by any destination airport for its ethnic profiling.

France and Germany are eying weapon deals with the Abiy government. On 30 December, there was a meeting at the French Embassy with the Special Economic Advisor to the PM on multilateral and bilateral economic issues.

French companies aim at military contracts with Ethiopia. There was a German military cooperation visit to Ethiopia, mid-November 2020.

“Personally, I am afraid that a horrific genocide on the Tigray people will emerge, once the region will be uncovered to the world. And for the umpteenth time an easy “Wirhaben es nicht gewusst” will be pronounced”

Destruction of Tigray’s small industrial base

Tigray’s small industrial base has been destroyed. The Alameda textile factory in Adwa was torched, the EFFORT consortium has been confiscated by the Ethiopian government. Numerous lorries, belonging to “Sur Construction” and “Trans Ethiopia” have been confiscated in Mekelle and driven to Amhara Region. 178 large lorries belonging to “Trans Ethiopia” have been taken by Ethiopian government.

When Tigrayan colleagues in Addis Ababa or in Amhara region were fired from their job, intimidated and imprisoned, cynically enough some of their neighbours and colleagues readily engaged to harm them more through comments on social media, presenting unfounded accusations about possessing explosives and millions. The aggressivity is widespread

Nyssen, J., 2021. The situation in Tigray at the beginning of 2021. Paper submitted to the HBS Special Issue on the Tigray war (Ethiopia).

For more detail, we refer the reader to the original work here.

An eyewitness account of what happened in Shire Inda Selassie

Tigray heritage at risk due to the War on Tigray

Campaign to Contain a Humanitarian Crisis in Tigray