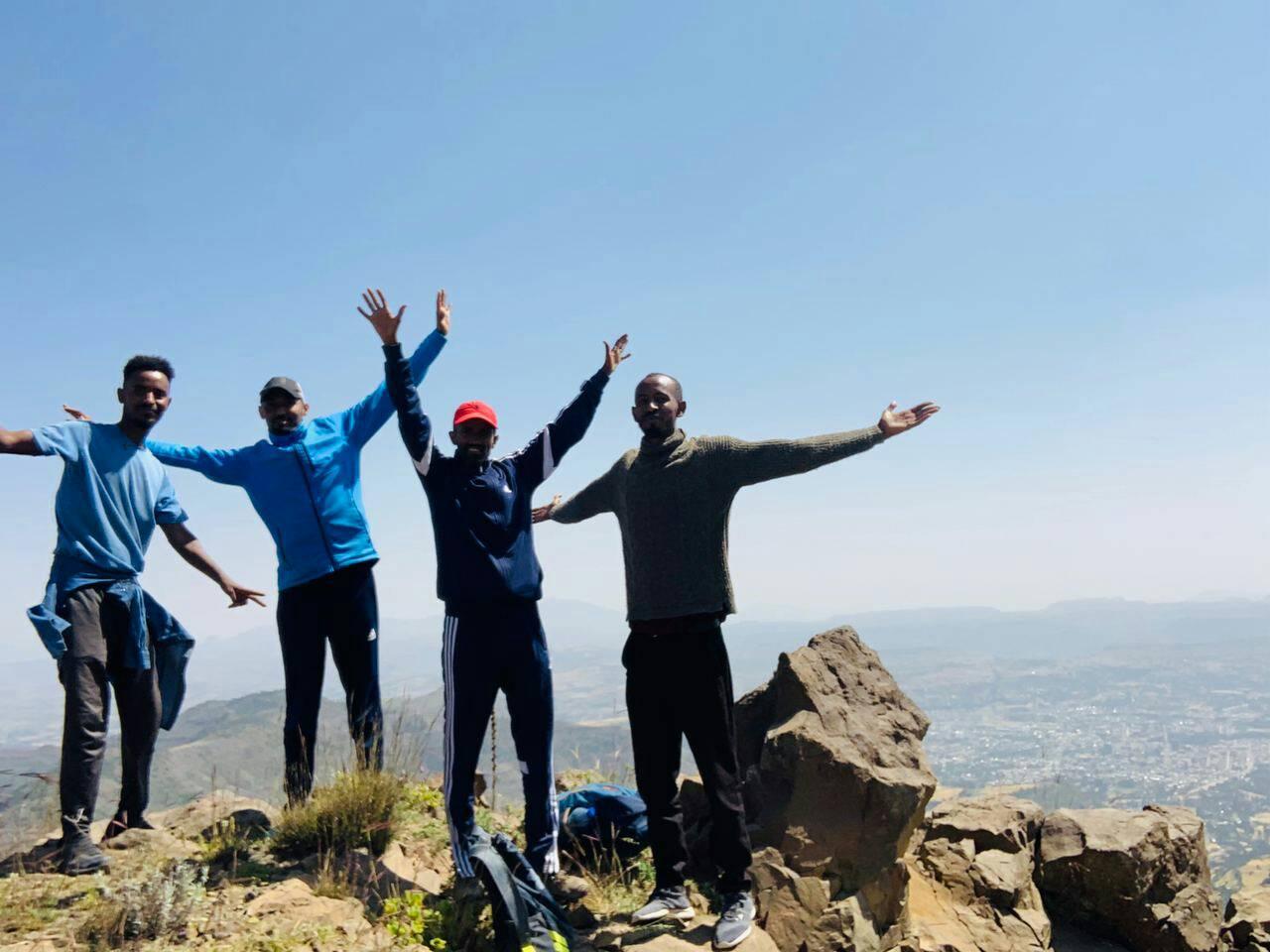 Editor’s note: The eyewitness account below is written by Getu Mak who witnessed the events in Aksum. Getu Mak is a lecturer at Adigrat University, a founder of TigraiCodes, and active member of Tigrai Hiking Group.

When all was well

I was a strong believer who used to cling to the idea that there is nothing which holds people back from whatever they want to achieve, until I was taught otherwise in the ongoing genocidal war in Tigray. I was late to appreciate words of wisdom from Paulo Coelho: “at a certain point in our lives, we lose control of what’s happening to us, and our lives become controlled by fate.”

In contrast to the rest of Ethiopia, Tigray was a safe and secure land to live and to work in. This deceived most of us not to suspect that, anytime, things could go wrong. As a CEO and one of the trainers at TigraiCodes (a non-profit organization which teaches high schoolers to code), I had a plan to stay in Aksum for one month (starting early October) along with my comrades. We were on a grander mission – to inspire and teach computer coding to Aksum high schoolers. Just one week prior to the end of our program, the government of Tigray declared a state of emergency. To our dismay, Ethiopia had declared war on Tigray.

War on Tigray, yet again?

After about twenty years, war became inevitable, and the unfortunate Tigray was again destined to be a battleground for the warlords. Starting Wednesday, November 04, 2020, everything was completely in a shutdown; banks, telecommunication, electricity, potable water and every means of transportation were suddenly blocked. The people knew that this was done deliberately by the Ethiopian government as a part of the looming war.

On Thursday, November 19, 2020, around 2.00 pm, Aksum and its surrounding were heavily and randomly shelled  from afar by heavy artilleries by the combined force of the Eritrean and Ethiopian troops to create havoc and terror, just like they did in the cities in western Tigray such as Humera, Sheraro and Shire, a couple of days before their arrival in Aksum. The entire city was in turmoil and every creature, not only humans but also animals, was in a great shock. However, as there were heavy tensions from the battle in Selekleka (around 37 kilometers west of Aksum) that have lasted for a couple of days, we had a conjecture that the enemy would easily give in Aksum. Immediately, I saw thousands of civilians, including my friends who were staying with me in a hotel, flee to the nearby villages, or to Mekelle (on foot), or to the nearby monasteries to save their lives. Many more civilians also fled from their home and spent that night at St. Mary of Zion church, and took refuge at similar other shields begging God’s mercy.

For my part, I had no clue what to do and where to go at that moment. I just looked up at the sky in vain. In despair, I just got back to my hotel room. I didn’t know the way out. I felt my humanity being swallowed by the mind-blowing thoughts, and everything was at the mercy of fate. All the energy, concentration and the things I wanted to have vanished in no time. To me, life became what Paulo Coelho said: I became the slave of fate before I knew it. I was left with two choices: to survive or to die, being locked inside that narrow room like the Rwandan holocaust survivor Immaculee Ilibagiza, as she narrated in her book “Left to tell.”

For almost a week, only the Ethiopian Army stayed there, while the Eritrean Army continued their ride to Adwa. They robbed the government offices, killed civilians, searched and inspected well-known persons’ and investors’ houses. They destroyed one of the international hotels, i.e., Brana Hotel, and they committed so many crimes behind the scene as the day got darker.

Exactly, after 8 days, on November 27, 2020, the Eritrean Army (around 50 – 80 soldiers) came back to Aksum and started patrolling the whole city, the nearby mountains and the churches. From afar, spotting through the window in my room, around 6.00 pm, after they took some pictures at the monuments and St. Mary, I saw them trekking to Mt. Mai-Khuho. The whole community was provoked and angry with their return and was warily watching their activities. Yet, it was obvious that they were back for something which was even worse. The next morning, around 7.00 am, a battle broke out between the Eritrean and Tigray’s army which consisted of around 30 militias who came from the nearby villages. The youths residing in the city stood in support of the army of Tigray in what was an inevitable life or death scenario. The battle lasted until 5.00 pm, before the whole city was surrounded with additional thousands of Eritrean troops who came from different corners of the city. Then every soldier from the Eritrean Army began firing bullets at every civilian who happened to be found on the streets. The mountain I hiked and camped out along with my other friends from Tigray Hiking Group a year ago, now became a place of attack causing the loss of the lives of hundreds of civilians. It felt like I was watching a horror movie made in my dreams. Never have I imagined that I would see such ruthless killings and a precarious situation in the city where I spent half of my life.

It is hard to estimate the exact number of people who were shot dead by the time the one-day battle was over. The number of corpses buried at the church of St. Mary of Zion was estimated to be around 720. In fact, this doesn’t include the number of farmers who were murdered in their homes at the nearby villages, which was worse than that of Aksum’s catastrophe. I am an eyewitness that the Ethiopian government troops were wiping out their own civilian citizens, compelling me to question whether Tigrayans are considered as Ethiopians or not. I also saw two Muslims who were murdered and their corpses were lying on one of the corners of the street around Piazza.

The next morning, on November 29, 2020, so many dead bodies were dumped on the street corners. The Eritrean Army went to and knocked every door around St. Michael’s neighborhood. They had a well-organized team to do looting and murders. That day, they killed hundreds of youths and Militias (if found and recognized), stole numerous properties from each household, including jewelries from the mothers’ necks in the daylight. In some of the houses, the minute they did that, they asked the women to make them coffee mockingly saying: “We, Eritreans and Tigrians are brothers and sisters.” What a cruel act?! If not in movies, would anyone imagine this would be happening to innocent civilians by fellow humans, except by Nazis?

Ever since that day, for about two months, it has been common to hear the sound of fired bullets and bad news of 1 to 3 murdered people every night. It has become a regular encounter as a result of the curfew decreed by the command post. So many households, governmental offices, hospitals and clinics, public institutions, private companies and hotels, bars and electronic shops, and stores were systematically looted and demolished. There were scores of people with chronic illness dying each day in their own homes as there was no medication available in the pharmacies in the city.

Today I live with countless horrific memories among which I mention the following. Around twelve years old boy, without any hesitation choosing to fight rather than being shot dead in indoor killings, was carrying two guns on both hands and joining the battle on November 28, 2020. I saw a young lady who was gang-raped by the Eritrean troops searching anti-pregnancy medicines home after home. I saw a group of hapless men passing through the main road carrying a pregnant woman on a wood pallet on their shoulders looking for a midwifery. God knows if she is alive or dead. Veterans (including my uncle) of the 17 years struggle against the Dergue regime were forced by the Eritrean Army to kneel and walk barefoot on the harvested lands. St. Mary’s hospital gate was used as a makeshift camp by the Ethiopian troops. Stolen ambulances of the Red Cross were used as means of transportation for the Eritrean Army. A guy whom I met and knew in the hotel got killed with three bullets fired on his chest in front of us outside of the hotel on the street. A mother who was looking for her lost son found him dead on the street, and she was forced by the Eritrean Army to jump over her son’s corpse lying on the street ten times back and forth. I saw horse carts (two-wheel carts drawn by horse) loaded with corpses going to the church for burial. The 48 hours went by without any thought and availability of food and drink in the hotel I was staying at. Every second, fate was deciding if we’d live or die.

Lords of the lies

While all these were happening in Aksum, I watched the Ethiopian prime minister, a Nobel Peace prize winner, saying that “not even one civilian got killed” in one of his Addis-based local outlets, despite all the atrocious crimes he has been committing together with his allies. Some Popes and priests from Addis, escorted by special commandos, came to celebrate ‘Hidar Zion’ (the annual celebration of St. Mary’s day). They were attempting to show the world that the holiday celebration ended peacefully, but that day was a dark and bloody day for all Tigrayans in general, and residents of Aksum in particular. Moreover, “TPLF is dead once and for all, no more Woyane!” was what the Ethiopian troops  loaded with guns chanted while they met ordinary people on the streets, as if all the civilians murdered and intimidated were pro-TPLF.

As I write this, the Ethiopian government is committing heinous crimes against humanity that have never been heard of elsewhere but in the concentration camp, Tigray. Yet, I don’t really know why the world remains coy. The silence hurts, and in the words of Martin Luther King jr., “in the end, we will remember not the words of our enemies, but the silence of our friends”.

The ongoing genocidal war in Tigray is devastating in its destruction, irresistible in its ferocity, appalling in its cruelties, and neo-Nazi in its context. It is piercing a hole through so many hearts and souls of Tigrayans and  no amount of time could help to heal. I have lost my younger brother – the little one whom I treasured as my own life. My younger sister is heavily wounded. Many of my friends’ whereabouts are yet unknown.

I now know that we, Tigrayans, have lost everything, the beautiful things we wanted to have in our lives. The atrocities that span from Mai-Khadra to Mariam-Denglet in Edaga-Hamus, from Aksum to Bora-Slewa are horrific. We are aggrieving and going through the hardest time. Nevertheless, we are ready and well prepared to accept all the sacrifices and face all the challenges until we own a proud and a promising nation we can call ‘motherland.’ Tigray, which will become a fertile ground to every one of us to achieve all our dreams. Things will then change forever and ever afterwards.

There are no signs whether the war will end soon. The government still continues to assault and use starvation as a weapon to its very own people hoping that it would achieve a victory at any cost. Alas, Tigray will never give up. Tigray will prevail!

More Videos and Photos from the Togogwa Market Day Airstrike