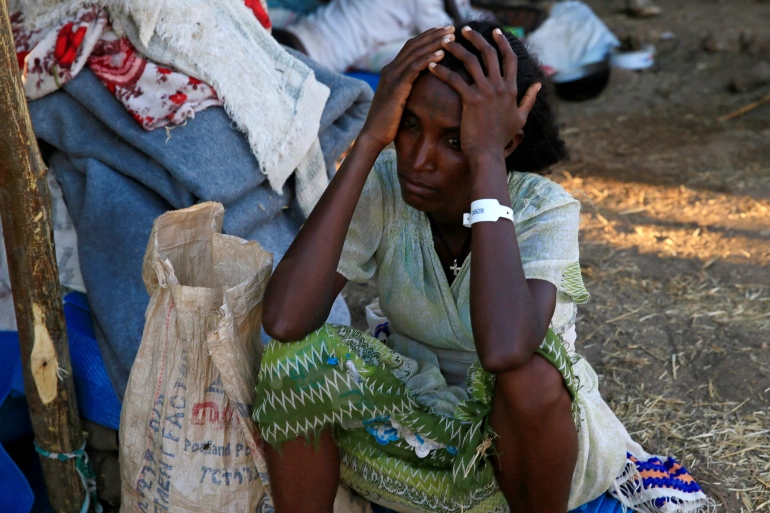 In this issue, Mekelle times presents a data of rape victims from the records of Ayder Referral Hospital. The victims come from different places in Tigray.

Issue 2 also presents a story of a woman recounting the war on Tigray as she experienced it. This is an important story as it tells the impact of the war as felt by an ordinary Tigrayan citizen. For ease of reading, we reproduce it below.

Reflection of a mother in her own words

Before the war started, life was continuing with all of us consciously trying to be careful not to get COVID-19. Our children had stopped classes due to the COVID 19 pandemic as of the second semester of last year, March 2020. Though our children have had some follow up and did some studies at home, both our children and many parents, like me, were looking forward to classes beginning on November 9. The war started on the evening of November 4, where we heard the first gun shots. Now we learn that both the Ethiopian and Eritrean governments were preparing for this war all of the past three years, with the Sudanese being asked to man the borders on November 2nd. At the time though, we were told the war came about due to an alleged attack by our leaders on the Northern Defence forces.

Our elected leaders in Tigray on the other hand informed us they had to take the pre-emptive strike as the threat was imminent. Now we see who was telling the truth. Since November 4, as parents we have been trying our best to keep our children safe, fed and as free from psychological stress as humanly possible, but it is really tough at times. I found the fighter jets flying overhead and the repeated bombing very stressful. My children notice and ask me why, and I explain to them. This made me realize that I have to try to minimize the trauma my children go through, so they will not have lasting effects in their lives. I however wonder if that is even possible.  Compared to many parents in Tigray, I count myself lucky, as we still have our home and we can move about in comparative peace, while in other areas homes have been destroyed, family members killed, whole families starved, people in their area randomly shot, repeatedly raided and bombed, etc. What I hear about what is happening to other families in my beloved Tigray breaks my heart, and I pray and wait for this nightmare to be over.

November 28, since mid morning Mekelle was being bombarded with heavy artillery. My children and I at first were scared and sat in a corner of the house thinking it would pass, but it did not pass. We then agreed on what is safe to do and not to do, and both food preparation and keeping the children safe and occupied was the order of the day. In the late afternoon, we hear on the TV news that a family of five people were shelled and all died. Including them a total of 19 dead people were reported, with many more reports that followed, the toll reaching 27 deaths in that one day. Later on I learnt from a family I know that a girl of 13 became hysterical as the bombarding and noise did not stop. She could not cope and run out. Her mother followed her out, they both ran, the daughter in front of the mother, and a shell fell near the daughter who passed away immediately and the mother was injured on her thigh. My heart is breaking, and I ask why? I also see how lucky my family and I were, as it could very easily have been us.

November 29, I discussed with relatives about my boy who is 15 going on to 16. The rumour in town is that young boys and young men are being hunted, rounded up, put into prison or shot. I ask around and I learn that is not true, but I am scared for my boy. Families who were in a similar boat decide to take their kids and go out of town. They ask to take him with them, and I agree. In the evening they climb a mountain to inform me they arrived at their destination safe and that all is well. They again inform me that all is well on December 1st as heavy fighting continues. Unfortunately, as of December 2nd all telephone communications stop, and my hopes of ever seeing him alive go with that. Despite all my worries, I still have to function and keep a stable house for the rest of the family. I am really worried and pray both day and night. Late afternoon on the 9th of December they come back, and I have another reason to be thankful to God. They tell me of all the war destructions they saw on their way, and my heart breaks for my beloved people and my beloved Tigray, and I ask why?

24th December, we heard of the death of several civilian family members who lived in the countryside. Among those who died was a great uncle in his 90’s, a priest in his 70’s and some younger men who were civil servants. All had absolutely nothing to do with the war, but were just living their lives in their own homes. At the same time we hear of so many deaths of civilians all around Tigray, and the reports we had been hearing of atrocities hit home. My heart breaks for my beloved Tigray, and my heart starts to hold a grudge. I know this is a feeling that many share, and I am scared that with the grudge, slowly creeps in the need for revenge and hate. I don’t want to see my beloved Tigray destroyed by hate and the need for revenge, as I wish for the same tolerant, peaceful and productive society for my children and grandchildren to live in, as that is what I found in this place I call my home. What the future holds is something we will see together.

On December 27, 2020 in church the clergy announced a call for help to look for a small girl of 13, who was lost. We learn the story that the family had gone to church on November 30th, and their daughter who was following them going back home suddenly disappeared and they have been looking for her. Due to the power vacuum and lack of the rule of law, there was no possibility to ask for help. After so many attempts the family were desperately asking the followers of the church to help them find their daughter. I wonder how many other problems people have gone through due to the lack of rule of law, and the power vacuum created. My heart breaks for the family, and we count our blessings that we have enough to eat, are safe and are living in comparative “peace?”

On 17 January, a cousin who lived in one of the small towns nearby came with her whole family to say hello and see if we are all ok. She had to travel with children of 5 and 2 for days to find a safe place until the war  was over. Many had died and suffered in her town, so we have been so scared for her and her family. Thank God she is ok for now, and we pray she remains so. She came on the 17th using transport, paying 300% more than what she would have needed to pay in the past. When the transport to her town started,  it was even 1800% times more. She informed us that none of the shops in her town have reopened, and that all were looted. She not only came to see us, but also to get basic supplies as her house was raided and she had nothing to eat in her house when she got back. Both she and the whole family are simply thankful that she and her family are all well. My heart this time is really thankful, but I worry and am scared to think of those who do not have family to come to and get supplies from. I am also scared to think of what may happen to her again, if the war continues like this. Her town still has no electricity, telephone, etc. It has been transformed from a lively small town to a ghost town.

On 22 of January, 2021 in the news we heard about reports by Médicine San Frontière that they found seven families who had died of starvation in their homes. What we had been fearful of is now what we see. Again my heart breaks, bleeds and I think I am again being filled with hate. I don’t want to hate, as the saying goes when you hate you get hurt twice. I want to see a future where our children and grandchildren will live in peace and not suffer repeatedly like we have. My beloved Tigray has seen too many wars in the past century or so, starting from the Turks, Italians, Sudan and the Kedamay Weyane, Derg, Eritrea, and now the current war, all in the space of 125 years. Some elderly among us have seen five of these wars.

We want peace, we are peace-loving people who want our population to be food-secure, to make its contribution to the global society in both science and technology. So my plea to readers is to please do your bit to help us get there.

The Issue can be read in PDF format


Or it can be downloaded from the link below.

Leave a Reply to Tigray will Prevail Cancel reply