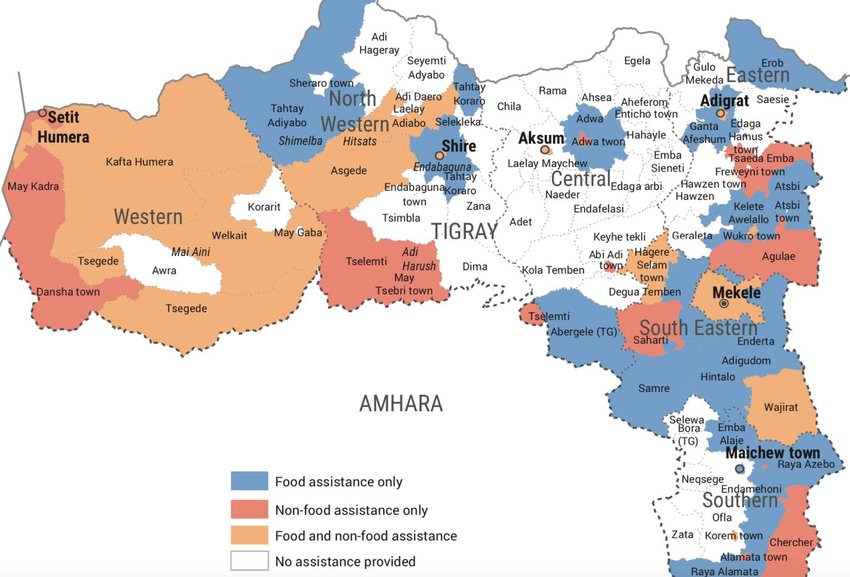 Internal U.N. document: 'Woredas with completed or ongoing response.' Note: the map uses the most recent woreda boundaries, as decided by the Tigray Regional Government in January 2020.

Formal humanitarian aid has not reached the millions of people who are in dire need of food aid in Tigray. This has also been confirmed by government officials and humanitarian workers who are operating on the ground. In some towns, people were required to sign that they received more food assistance (grains) than they actually did. Use of starvation as weapon of war was the common thread in many of the testimonies received.

Detailed information was available only for Shire where the government claims it dispatched food aid to in two batches. According to UNOCHA reports, the government dispatched 44 truckloads and 30 truckloads of food supplies to Shire and Mekelle, respectively. Assuming a 15 kg person, at least 73,000 people (including IDPs) in Shire could have been supplied with such volumes. Second batch of food aid, aimed to benefit more than 130,000 people, was also planned for Jan. 25, according to the UNOCHA. The reports also claim food aid had been delivered to all zones of Tigray without providing detailed information.

Initial aid delivery was done in December. Not all Shire residents received food aid, the distribution of which was handled by the Ethiopian government. Shire residents who received 7 kg of wheat were forced to sign that they received 15 kg or risk losing the 7kg. Electricity blackout means even those who received grains have no way of grinding and using it. There clearly is a shortage of food in Shire which is forcing residents to sell their belongings at much lower prices to buy food.

There are about 80,000 IDPs in Shire quartered in schools and colleges. Amongst the 40,000 IDPs at the Shire campus of Axum University are pregnant women and people with chronic diseases. The report details that in one particular day, the staff distributed aid until 6 PM. Those who lined up the next day were, however, told the wheat was stolen. The informant told Prof. Jan Nyssen that “there is ample evidence that all the remaining wheat was transported to Eritrea by the Eritrean soldiers.” Food aid distribution in January targeted only IDPs while excluding Shire residents.

Not all people have received the 15 kg grain per family assistance that is thought to have been distributed. People wonder how many days a 15-kg-food assistance lasts and believe Eritreans are taking the remaining volume.

People were made to sign for 15 kg though they received only 7 kg.

According to the testimonies, people were registered four times in the hope they would receive aid but none was given. They believe those who register them “are taking the grain for themselves and resell it”.

Food aid of 25 kg of grain brough by the Relief Society of Tigray (REST) has been interrupted for reasons people do not understand. Recently appointed district administrator, who is in charge of aid distribution, is very much detested by residents for working with the government soldiers.

Some people received 8 kg of wheat and expired corn flour (aka fafa).

Food aid in minimal amounts reaches towns and villages along the main roads. Those in charge aid distribution don’t deliver to rural areas; nor are rural people told to collect it in town.

A staff member of a major local NGO told Prof. Jan Nyssen that they are only responsible for transporting food aid in bulk and that they don’t have control over the last-mile distribution; i.e., others determine the beneficiaries and quantities. A person who wants to be a member of the Prosperity Party (PP) is given “quintals & quintals of grain” while “the poor gets nothing”. Those with abundance end up selling the surplus on the black market. The witness also narrated a saddening experience in which the food aid delivered to a particular district under Eritrean control was taken by Eritrean soldiers. The government has dissolved the boards of two local NGOs (TDA & REST) at a time when the people of Tigray need them the most.

According to a UN staff who spoke with Prof. Jan Nyssen, the territory north of the road from Adigrat to Shire is 100% under Eritrean control and the absence of food aid south of that road could be attributed to the ongoing fighting.

Weaponization of Starvation against Tigray

The use hunger as weapon of war against Tigray was the common thread in many of the testimonies. The AP also confirmed that the Ethiopian government withheld aid from those suspected of having links with the TPLF. “If you don’t bring your father, your brothers, you don’t get the aid, you’ll starve”. Food assistance has been interrupted in Hawzen and Tembien as of February 10 following an order from the ENDF presumably in response to the heavy losses they suffered in early Feb.

According to a UNOCHA official, the major problem, as far as food distribution is concerned, is “access to get into Tigray in the first place and also getting from Mekelle into the countryside where most of the people in need are.” Despite the government’s claim that all is going well, the EU said blocked access continues to “prevent the provision of humanitarian assistance to address the immensity of needs, avert the risk of famine and prevent further loss of life.”

This is a summary of research conducted by Tim Vanden Bempt & Jan Nyssen. For more detail, we refer the reader to the original work: What happens with the limited volumes of food aid that are sent to Tigray?

Tim Vanden Bempt is a concerned citizen (Leuven, Belgium) who follows the war in Tigray closely. Jan Nyssen is professor of geography at Ghent University (Belgium) . Jan Nyssen is full professor of geography at Ghent University (Belgium). Besides numerous scientific publications mostly related to Ethiopia, he published two books: “ካብ ሓረስቶት ደጉዓ ተምቤን እንታይ ንስምዕ”? “What do we hear from the farmers in Dogu’a Tembien”? [in Tigrinya] (2016), and “Geo Trekking in Ethiopia’s Tropical Mountains, the Dogu’a Tembien District”. Springer GeoGuide (2019).

Drones and Machetes: The Race towards more Death