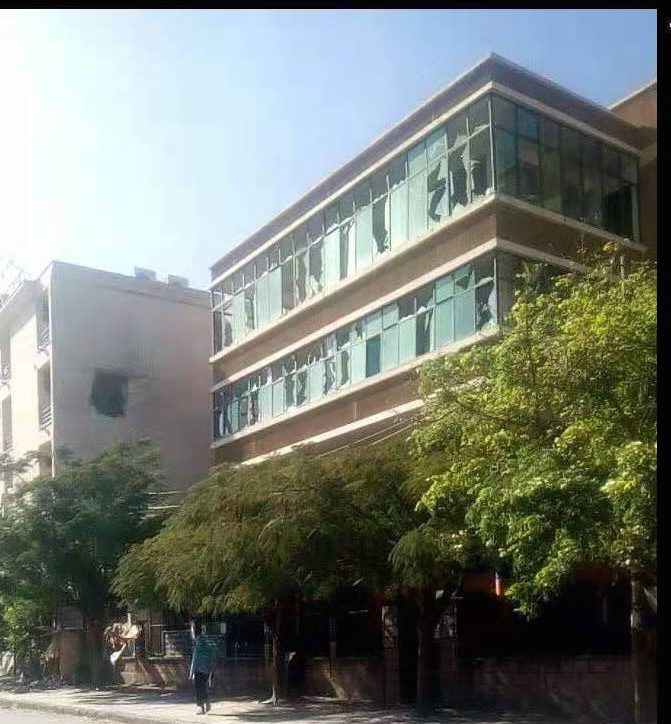 Editor’s note: This account comes from an eyewitness, a professional who witnessed the war in Shire, and who asked for anonymity for fear of reprisal. He had previously sent us photos and images which we published here.

The situation in Tigray in the last four months resembles how Romeo Dallaire described Rwanda: “the devil took control of paradise on earth.” The devils in Tigray are the Ethiopian military, Eritrean forces, Amhara special police forces and militias, and other allies including the UAE and Somalia.

The people of Tigray have been subjected to extrajudicial killing, looting, rape, and their houses and crops were burnt. As banks were closed, food items looted and crops burnt by Eritrean forces and Amhara militias, hunger ensued. Tens of thousands of people have been forced to flee their homes.

On November 16, the sound of artillery gunfire was close, and we could hear it from the city. We started being terrified. At 8 pm, I was having dinner, and heavy shells started dropping into the city. This lasted for more than an hour. I heard later that four civilians died in Kebelle 04 (subcity).

Early morning the next day, my Mother begged us (her children) to leave the city and go where our neighbors were going. My mom and I went to hide in a cave in the outskirts of the city but my brother stayed at home.  As we were heading to the cave, we could see the city burning here and there. I have seen the strikes and smoke. Around noon, the sound of gunfire started to recede, as the fighting got further and further from the city. People who joined us later told us that the Eritrean and Ethiopian troops controlled the city, and that they found Haile Gebremeskel, my neighbor, and another man – both civilians – dead in the street. We spent the night in the cave.

As we had no food, clothes and water, we decided to go back home the next day. We saw scores of dead bodies of civilians along the road to Endabaguna. Some were killed by bombshells and others were shot dead by the Ethiopian and the Eritrean soldiers. I lost my childhood friend, Kewani Gezae. He was killed along with his two younger brothers. Nearly 200 civilians lost their lives that time. Two of my childhood friends lost their fathers; Yirga and Teklebirhan were their names. My friend’s fiancé, Zaid, and my high school sport teacher, Mr. Yirga were among those brutally killed hundreds of civilians. I also recognized another man who worked as an attorney, my neighbor I mentioned above, and Tirhas.

Many people with mental health problems were murdered by the Ethiopian soldiers on the auspices that they could be spies. Many who were afraid and ran to hide were also shot dead. A bajaj driver was killed only because he was wearing boots that look like the soldiers’, and they killed a passenger they found in the bajaj too.

Three security guards working for the Gebere Menfes Kidus church and one for a flour factory were killed. All four were on duty and thus armed, but they were old men at work with no intention to get involved in the war.

Many factories, hotels, a mosque, churches, and condominium buildings were intentionally demolished by the troops. A condominium building in Kebelle 01 was destroyed by a tank while there were no armed people in the area. The northwestern zone administration building and the social court in Kebelle 01 have been entirely demolished by shells. Zenith hair oil factory, Gebar Shire hotel, Dejena hotel, three churches, and a mosque found at Kebelle 03 are among the most important landmarks in the city that were highly damaged. Particularly Dejena hotel was intentionally demolished using explosives after the Ethiopian army took full control of the city.

The Ethiopian troops were engaged in a very scandalous robbery and looting. They robed shops during their entry and continued to rob different organizations that they were supposed to look after. Apart from the many shops, I heard and verified later, that the Ethiopian forces robbed Abyssinia bank, Shire high court, Hadas hotel, and Dejena hotel. The soldiers confiscated money in the city center from youths, some of whom were lucky enough to claim it back with the help of an army commander.

Having heard all the horrific news and seen the dead bodies, I was worried about my brothers, sisters, friends, and relatives. Amid the telecommunications blackout, it was impossible to know their whereabouts. For some, it took us three months to have a news about them. Many people do not have any news about their loved ones, parents, or children until now, and they have no choice but to accept their death. Many try to describe the clothes they were wearing and their height when they ask people if they have seen a person.

Hunger and lack of Medicine

The war broke out suddenly and banks were closed before people could withdraw their money.  Many people did not have enough cash even for two weeks. In the beginning, some families with children were facing food shortages, but later, almost every household was in danger of starvation.

To make things worse, the Eritrean troops either looted or burned down crops in the rural areas, and this created shortage of food supply. Prices skyrocketed even when many people has hardly any cash.

The Ethiopian government lies about delivering food to the people, as it lied about Eritrean troops not entering Tigray and about no single civilian being hurt during the war. In reality, the displaced people received 15 kg of wheat once and were told to leave the camps and go home. The residents of Shire received 7 kg of wheat once. This aid has been delivered by the WFP.

Many people are also dying due to lack of medicines, health care service and midwifery.

The Ethiopian troops were assaulting and arresting civilians suspected of having family members in the Tigray Defense Forces. As terror reigns, people burned or buried any garment or photo with Tigray’s flag in it or military clothes.

We were terrified when we see Eritrean soldiers because of what we hear about how evil they are. Even the Ethiopian troops, going by bus, warned us that they would kill us when they return. Since then, we were praying that they die and never come back.

Random shoot guns up into the air, for no apparent reason, which sometimes lasted for hours, terrorized the people. We were also afraid that they would forcefully conscript the youth to the Ethiopian army, as the border issue with Sudan escalated. We hear reports that most of the senior members of the Ethiopian army were rendered useless in the war with Tigray.

The Ethiopian troops were engaged in trading activities. They were selling laptops, flour, sugar, gases, oil, and so on. These are, obviously, items looted from stores and government offices.

As part of the strategy to weaponize the economy, the government had changed money notes before the war broke out. Banks being closed, both the old and new notes were still in circulation. The Ethiopian soldiers, well aware that the old notes were no longer valid, were forcing people to sell them cigarettes, chat, and food with the old notes. Later on, they began forcing people to give them new notes in exchange for old ones, at a rate 80 or 90 new note for 100 old notes. Each soldier had thousands of old notes probably stolen from banks and other organizations.

They take it from the people and sell it, by force, back to the people.

After ethnic cleansing of Tigrayans from Western Tigray, Amhara State proceeds to lease and distribute their farmlands to Amhara investors

President Debretsion Gebremichael of Tigray Address to the International Community