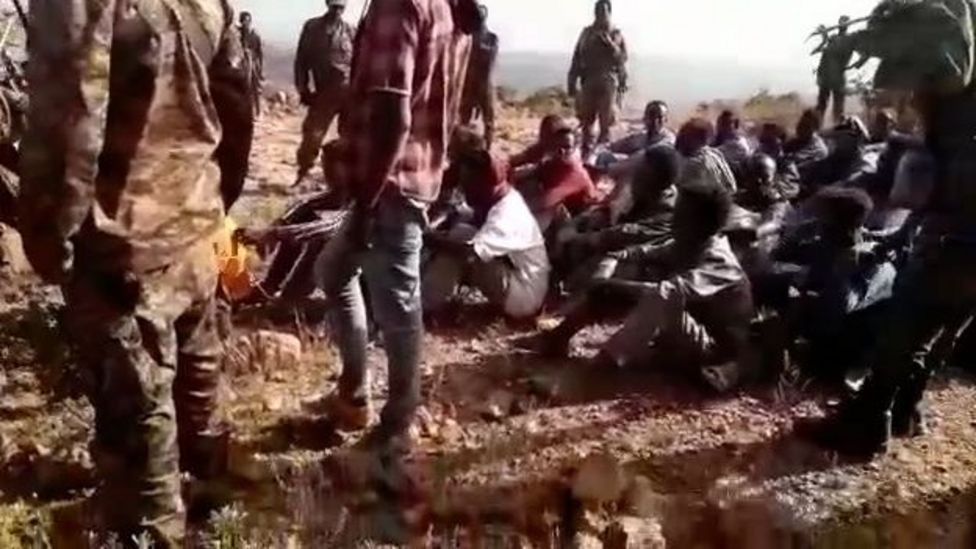 The war on Tigray has multiple parties (the Ethiopian National Defense Forces (ENDF), the Eritrean forces and the Amhara Forces) with multiple motives (ranging from regime change to land grabbing to ethnic cleansing to wanton extermination of the people of Tigray).

This has complicated an already complex state of affairs.  On the receiving end, the people of Tigray are being killed by all invaders, each with their own ingenuity of radical evil.

The ENDFs have committed all kinds of crimes such as extrajudicial killings, massacres, rape, looting, pillaging and starvation, as have the Eritrean soldiers and the Amhara forces.

More than 90% of the victims identified were male. Among incidents where blame can be confidently determined, Ethiopian soldiers appear to have been responsible for 14% of the killings, Eritrean troops who have fought alongside federal forces 45%, and irregular paramilitaries from the neighbouring province of Amhara 5%. Witnesses blamed Ethiopian and Eritrean soldiers operating together in 18% of cases.

It is likely that each new case of massacre is overshadowing other massacres in other parts of Tigray, at other times, by the rest of the invaders. The Ethiopian forces have committed war crimes and are still killing civilians as much as (if not worse than) the Eritrean soldiers and the Amhara forces have done. None is less evil. Only the active story on the front pages is temporarily overshadowing the rest.

Gathering the massacres committed by the ENDFs may remind us of the scope of the human suffering, the scale of the war and the depth of the malevolence (ca.’Choose – I kill you or rape you‘) of the ENDFs and the ingenuity and mercilessness (ca.‘save yourselves’) of their evil acts. Any particular case of massacre or rape or other war crimes that you encounter on the media is only a part, a small one, of a carnage that has lasted for five months.

The Massacre in Mahbere Dego

The BBC and CNN have covered the harrowing reports of deliberate, recorded and verified mass killings of at least 34 civilian men (probably more as locals said 39 men were missing). It is only natural to be shocked and to condemn this in the strongest terms possible because it is a grave war crime. In the mean time, thousands of equally innocent civilians succumb to the equally merciless and well meditated acts of terror by the same Ethiopian military.

Each reported case of massacre should remind us that there are hundreds of other similar or worse cases, instead of overshadowing them.

The Massacre in Debre Abay

On 5 and 6 January, at least thirty men were massacred who can be seen in a graphic footage in Debre Abay. Tghat reported the footage until France 24 published this story a month later.

The Massacre in Bora Selowa

Between 8 and 10 January, more than 100 people were massacred in Bora Selewa, Southern Tigray. This hasn’t been covered by international media partly because it has been overshadowed by other similar massacres.

The Massacre in Adi Hageray

An eyewitness recounted that on 12 November 2020, Ethiopian troops came to the town and killed anyone and everyone they found on their way.

The Massacre in Chercher

Tghat has documented on December 12, last year, that once the Ethiopian forces entered the town of Chercher, they massacred about 70 young men assuming they were TPLF sympathizers.

Bisober is a farming village where the ENDFs, on November 14, separated men from the women in the village and shot them dead.

The ENDFs stand accused of indiscriminate shelling of densely populated residence and civilian neighborhoods of many cities and towns.

Ethiopian federal forces carried out apparently indiscriminate shelling of urban areas in the Tigray region in November 2020 in violation of the laws of war, Human Rights Watch said today. Artillery attacks at the start of the armed conflict struck homes, hospitals, schools, and markets in the city of Mekelle, and the towns of Humera and Shire, killing at least 83 civilians, including children, and wounding over 300.

This list is just the tip of the iceberg. Just like the Eritrean army, the Ethiopian army has committed crimes of horrifying massacres, executions, killings, and indiscriminate shelling of civilians and civilian infrastructures, and rape of Tigrayan women and girls. It is no less involved in crimes than the Eritrean and Amhara forces, and attempts to present it as better are either wrong or disingenuous.

The Goda massacre: The story of three brothers

Tripartite Malice and the Genocide in Tigray