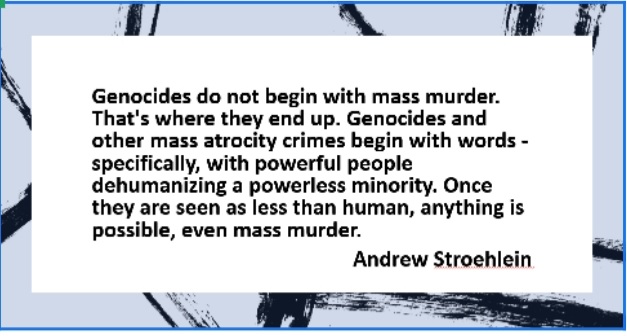 Genocide starts with language. A campaign of genocide is always preceded by cultural and socio-political preconditioning shaped by a discourse that dehumanizes and ‘others’ a certain group of people. Such preconditioning primes a society to accept that the removal or extermination of those dehumanized people – generally a minority – is necessary for the well-being of the majority. Dehumanizing rhetoric makes it possible for a society to accept violence carried out in its name. It renders people as less than human removing the moral dilemma of evil acts and justifying violence and collective punishment against them. In the past, the Jews were called rats, the Tutsis were referred to as cockroaches; what followed such dehumanization is a matter of historical record.

“Genocides do not begin with mass murder. That’s where they end up. Genocides and other mass atrocity crimes begin with words – specifically, with powerful people dehumanizing a powerless minority. Once they are seen as less than human, anything is possible, even mass murder.”

Dehumanizing language has become part and parcel of the political and cultural discourse in Ethiopia. One only needs to pay attention to the frequency of using animals or sicknesses (chameleon, scorpion, spider, snake, pig, donkey, hyena, termite, hippo, cancer, malaria, dung) in day-to-day conversations to describe individuals and groups. The impact of dehumanization is not limited to those who are dehumanized, but a society that accepts dehumanization as normal loses its capacity for empathy and solidarity. This is reflected in the society’s response to the suffering of dehumanized groups; once the dehumanizing process is complete, no amount of suffering gets the humane response it demands but is rather belittled and trivialized, adding insult to the victims of genocide. In the face of growing evidence of atrocities, the suffering of victims and their cries become suppressed by the chorus of voices who deny, distort, deflect, or outrightly blame victims for their misery.

In the Ethiopian context, this problem has been gravely exacerbated because a sitting PM, in charge of state media that is part of the propaganda machine, publicly uses a language to reduce human beings into “animals, a sickness, aliens or non-human entities”, it has set a dangerous trend for a number of reasons.

In the last three years, the significant socio-political changes happening in Ethiopia have been characterized by a constant undercurrent of the othering of Tigrayans as the enemy of the nation. One can trace this development to the constant anti-Tigrayan sentiment that underlies political discourse in the history of the country and that occasionally bursts into full-blown genocidal war policy towards Tigray and Tigrayans. This development has been gaining traction in the last few decades.

In April 2018, Abiy Ahmed Ali came to power riding a popular anti-TPLF/EPRDF (Tigray People Liberation Front/Ethiopian Peoples Revolutionary Democratic Front) protests that engulfed large parts of the country. Once in power, even Abiy found vilifying and blaming TPLF for all of the ills of the country, even though it was still at that time one party in the coalition, a politically expedient strategy. He embarked on the new journey of “rewriting history to suit his own narrative”. Characterizing the era of EPRDF reign as “27 dark years” became a mantra to establish TPLF as the bogeyman of Ethiopian politics – something that some opposition groups, particularly in the diaspora had sought to do for decades. In addition to the rhetoric, as part of his “reform”, Abiy took a series of measures like purging Tigrayans from the defense, security, and other key institutions; dissolving the EPRDF coalition, and replacing it with the Prosperity Party (which the TPLF refused to join for ideological and other reasons), and arresting high profile Tigrayan leaders in the name of fighting corruption. Parallel to the changes Abiy introduced, the vocabulary of the political discourse that accompanied those changes underwent a transformation from simple labels for TPLF and its leadership to becoming dog whistles, ethnic slurs, and dehumanizing rhetoric targeting Tigrayans. Terms like cancer, hyenas, termites, those who “bite the breast of their mother”, circulated to demonize Tigrayans. Significantly this development was not just confined to the fringes of society or even limited to the political discourse among ordinary citizens but has been promulgated and promoted in carefully crafted speeches by the country’s prime minister, Abiy Ahmed. Besides the premier, party ideologues, prominent media figures, and social media influencers have normalized and mainstreamed the dehumanizing discourse, making it a staple of media consumption in Ethiopia.

The following are some examples of dehumanizing and hateful rhetoric featured in Abiy Ahmed’s press briefings and public speeches over the last three years. In June 2018, in a press briefing shown on state TV, Abiy addressing current issues in the country referred to “day-time hyenas/የቀን ጅቦች ” as being a group working to initiate civil conflict. This dog whistle widely understood at the time to refer to TPLF leadership was almost immediately deployed and applied as an ethnic slur to alienate and collectively blame many Tigrayans.

Shortly afterward, in July 2018, in a TV interview following a spate of violence in Benishangul-Gumuz Abiy called for people to watch out for “tsegure-lewet – outsiders/ጸጉረ-ልውጥ” – a term which means strangers or newcomers to a community – i.e. the other. Again this othering language was understood as referring to TPLF and by association Tigrayans. In essence, this term put a rhetorical label that made Tigrayans across the country suspect and potentially susceptible to mob justice and other extra-judicial action. Such dehumanizing language was not limited to speeches by the premier but was disseminated widely in the media which deployed news reports and dedicated documentaries feeding anti-Tigrayan rhetoric.

Another term that has been widely employed to ‘other’ Tigrayans is “Tigrigna-speakers”, popularised by social media personalities and mainstreamed by documentaries. Following the killing of the famous Oromo artist Hacchalu Hundiessa in June 2020, the term was used as a label of collective criminalization during the press conference given by then attorney general Adanech Abebe. At that time when the country was rocked and ethnic tensions were particularly heightened she alleged that the perpetrators were “Tigrigna-speakers‘” thus again endangering Tigrayans to retributive actions. More recently this term was also used in a press statement by the Ethiopian National Defense Force.

Apart from the state media milieu, there have been video clips circulating on social media that clearly incite violence against Tigrayans. One well-publicized event involved an Amhara militia commander urging a packed auditorium of young people to attack Tigrayans in the region and even attack and plunder the region itself. A different clip stresses that Tigrayans are an ethnic minority (6 million) and can easily be eradicated even if it meant losing the same number in the process.

Within the context of informal but highly influential social media discourse words and phrases with clear genocidal intents like “to kill the fish, drain the sea”, “95% versus the 5%”, “it is an honor to kill a Tigrayan ” have become regular features. Recently, a prominent social media influencer has called TPLF supporters termites – a term that echoes the othering of Tutsis in the Rwandan Genocide.

All these words and phrases may be concerning in isolation but when put in a broader context of the reign of Abiy, they are part and parcel of a downright alarming political narrative that has been instrumental in the othering of Tigrayans. Such dehumanizing rhetoric has led to rising anti-Tigrayan attitudes where words and phrases took on a life of their own and became a generic label against ordinary Tigrayans. In a country like Ethiopia where society is polarized along many fault lines, the transformation of dehumanization rhetoric into genocidal action is swift and imperceptible. For the last five months, we have seen how this dehumanization has been transformed into a war policy and led to the unfolding reality of ethnic profiling, genocide, ethnic cleansing, weaponized rape, weaponized starvation, and destruction of historical and religious heritage.

The dehumanizing language against Tigrayans that has filled the airwaves has rendered Tigrayans as the enemy who exists outside the circle of Ethiopian body politic whose suffering does not deserve a human response. The gruesome videos showing the killing of innocent Tigrayans, the use of rape as a weapon of war, and the language used in these videos are ample evidence for how dehumanizinging language has become instrumental in the treatment of ordinary citizens. Moreover, in the face of unfolding genocide, this also explains the enthusiastic celebration of the start of the war, declaration of victory, and the silence over the continuous use of starvation as a weapon of war.

Despite the communication blackout imposed on Tigray, when news about atrocities and evidence started to filter out, Abiy Ahmed continued with his project of dehumanizing Tigrayans by promoting narratives that either deny or normalize the suffering of civilian Tigrayans as collateral damage. In his recent speech in the national parliament, beyond the admission of the presence of the Eritrean army in Tigray, he spoke about the women victims of weaponized rape as if they don’t exist and their suffering is belittled.

His state and social apparatus have been supporting this initiative. Daniel Bekele – the head of Ethiopia Human Rights Commission has called the crisis in Tigray “not as expected as it was feared“. Prominent individuals like Daniel Kibret, Abiy’s advisor on social issues said that upto a million Tigrayans are traitors and their death should not matter. Similar statements have been said by popular religion leader Jemal Beshir.

The slow response of the international community so far indicates that the nuances of the dehumanization of Tigrayans are yet to register completely and may even be lost in translation. Framing the war on Tigray as merely a political, or power issue between equal parties, grossly misses the true extent of war crimes committed by the Amhara militia, the Eritrean, and the Ethiopian army on the civilian population of Tigray. It is only recently that the global community is waking up to the horror of atrocities committed in Tigray, however, the response is still inadequate to stop the ongoing war crimes and crimes against humanity.

For Tigrayans and all other ethnic groups who have been dehumanized and subjected to state-sponsored discrimination and violence, the fight against dehumanization is not limited to an effort to stop the ongoing genocide. But it goes beyond and summons all to call out the language and the political discourse and narratives that feed the violence. This starts by naming and calling out the dehumanization perpetrated by the premier and the state media as well as influencers who have been complicit in this phenomenon.

Temesgen Kahsay is an assistant professor at the Norwegian School of Leadership and Theology. His area of research is the intersection between religion and society, religion and culture and the role of the religion in the contemporary local and global contexts.

Sexual Violence as a Weapon of War in Tigray: A Call to Action