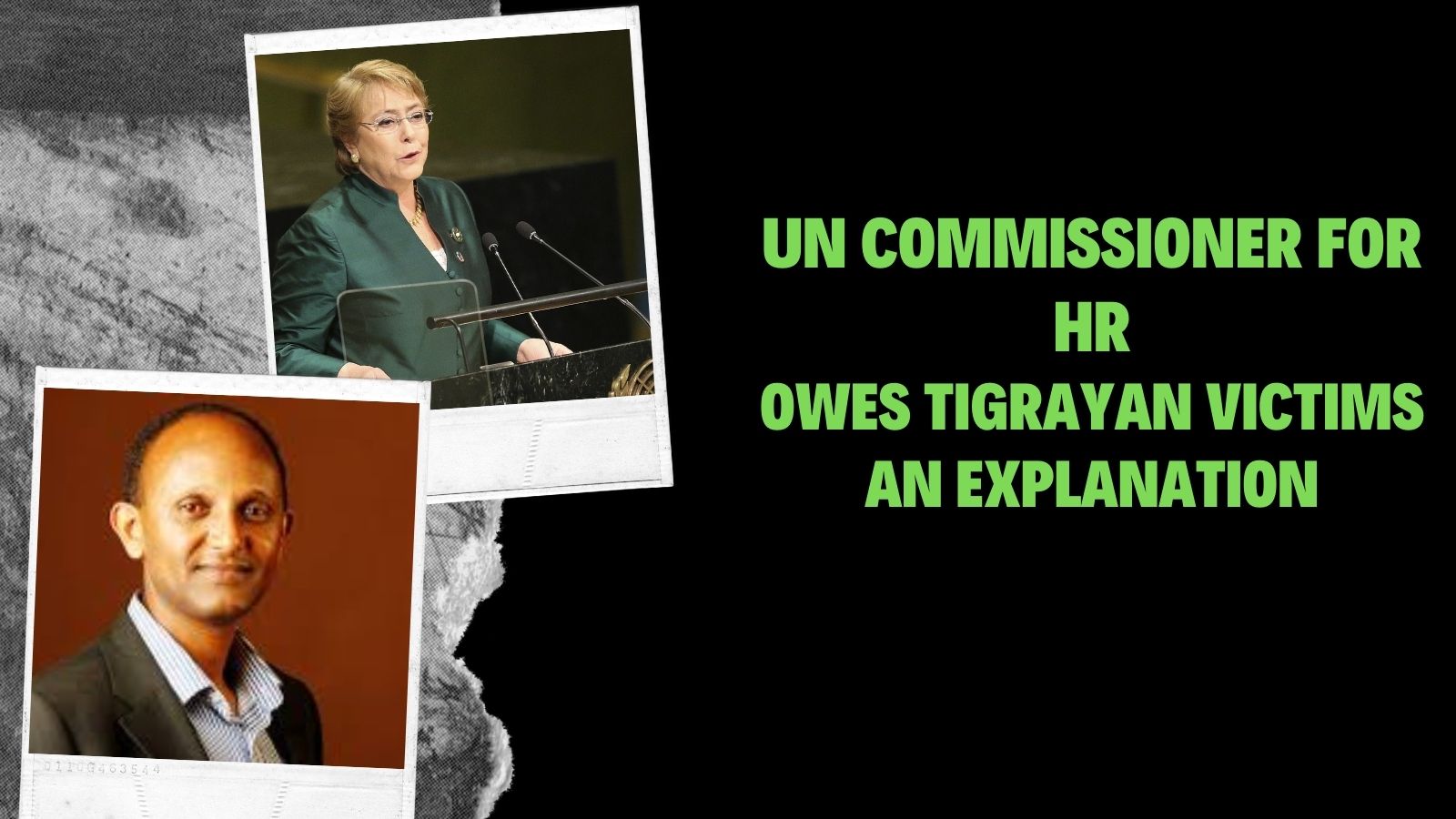 When Ms. Michelle Bachelet, the UN’s High Commissioner for Human Rights, announced in March 2021 that her organization would conduct an investigation into crimes allegedly perpetrated by Ethiopian and Eritrean forces in Tigray jointly with the Ethiopian Human Rights Commission (EHRC), the reaction among Tigrayans was a mix of cautious optimism and anger.

The optimism emanated from a desperate belief that the investigation, however flawed, might bring an end to the impunity with which the allied Ethiopian and Eritrean forces had acted in Tigray. By that time, the forces had turned Tigray into a scene of dreadful carnage – hundreds of women had been raped in inexpressibly cruel manners; dozens of massacres had been committed; thousands of civilians had been murdered; and civilian infrastructure, factories, churches, and mosques had been destroyed, looted and desecrated. Amidst all of these, however, not even a single person had been held to account. Nor was there any real expectation of justice from the Ethiopian regime which had deployed its entire diplomatic and public relations apparatus to deny the crimes.

The announcement of the joint investigation was, therefore, of some consolation to some people who cautiously hoped that even a flawed investigation could not completely deny the sheer extent and gravity of the brutal atrocities committed in Tigray. It seemed right to expect that any investigation would be better than none at all.

There was also disappointment, concern, and anger at the inexplicable inclusion of the EHRC, under the umbrella of a so-called joint investigation. This consideration stemmed from several well-known and publicized facts that clearly demonstrated that EHRC can not satisfy the basic tenants of impartiality, objectivity, credibility, competence, and capacity for such investigation that are central to the United Nations Guidelines.

In the first instance, EHRC is a state-funded body with a state-appointed commissioner. Quite obviously this introduces an obvious conflict of interest which would cast doubt on its ability to be equally impartial in a situation where the government that is allocating resources and appointing personal is one of the entities that is under investigation. This has no more clearly been demonstrated than in the recent report by Daniel Bekele, head of the EHRC to the Human Rights Council, in which he seemed more concerned in defending the Ethiopian government and minimizing any culpability of Ethiopian forces than with actually addressing the atrocities the joint investigation was expected to address.

It bears noting that this is by no means an anomalous stance on the part of Daniel Bekele, who persists in suggesting that allegations of crimes by the Ethiopian and Eritrean forces had been exaggerated. The governing impression that he and the body he heads have consistently sought to convey has been that the devastation, massacres, and rapes are inevitable collateral damages. It was obvious to any observer of this track record – as it should have been to the UN – that such a body would be inclined toward a “finding” that would bear out the stance that it had already taken.

Secondly, the Ethiopian regime’s dogged and absolute rejection of any independent investigations seemed to have forced the Office of the UN Commissioner of Human Rights to acquiesce to the involvement of EHRC. The only reason that the Ethiopian government would strong-arm such a decision is if it felt threatened by an independent investigation and wished to contain and minimize the findings. This is clearly tantamount to allowing an alleged criminal to suggest a member of the investigating or prosecuting team. There is little credibility to be anticipated from an investigation that was intentionally and deliberately polluted from the outset. Many Tigrayans recognized what the Ethiopian government was up to and raised the most likely outcome of such interference through various forums, including various efforts by Tigrayan Civil Society Organizations to raise concerns with the Office of the High Commissioner.

Thirdly, the EHRC has demonstrated time and again that it lacks the professional will and competence to conduct the type of investigation that would be required to address the grave and extensive atrocities committed in Tigray. This has been evidenced in the activities of the commission in the last three years when the EHRC has been persistently and consistently selective in what it chose to investigate in Ethiopia and when it investigated. Time and again the commission ignored large-scale atrocities including massive political crackdowns by the government in Oromia in 2019/2020. On the other hand, however, when investigations and politically expedient results were needed by the government the EHRC delivered what was needed. Most notable in this regard of course the momentously flawed report on the Mai Kadara Massacre which was subsequently used by the Ethiopian government to enflame genocidal outrage against Tigray.

Despite these and other legitimate concerns, recent statements from both the Commissioner and EHRC regarding the completion of the first phase of the joint investigation make it clear that the UNHCR chose not only to go ahead with what was from the outset a questionable venture it did so according to the terms set by the EHRC and the Ethiopian government.

The first giveaway, in this regard, is the places the investigation did not cover. It has been credibly established beyond all reasonable doubt that Eritrea and Ethiopian forces murdered hundreds of civilians in Axum in December. Even so, the Ethiopian regime has persisted to deny or downplay the magnitude of the atrocity, including deploying the EHRC to under-report it. An independent investigation of the Axum Massacre carried out by the UN – particularly in light of the attention and coverage this terrible occurrence has had in the last few months – would have been damning of the regime. It stands to reason therefore that the regime would not have wanted the joint investigation to cover it. And sadly, that is exactly what happened – the UN probe did not reach Axum. Debre Abay and other places where egregious massacres have been committed against civilians also failed to make it into the investigation.

Ms. Bachelet offered a bizarre explanation for this incredible omission. She said her team was unable to reach Axum due to “security reasons”. According to humanitarian workers, there is no security concern in areas of Tigray under the control of the Government of Tigray. What kind of “security concern” did the team face? Was it prevented from traveling to Axum by authorities in Addis Ababa? Did the Tigray Government refuse to provide protection to the team of investigators? We can be reasonably sure that the latter is not the case in as much as the President of Tigray, Debretsion Gebremichael, has written a letter to her team to assure them that the Tigray Government would provide them with protection.

Or, could it be that the Abiy regime did not want investigations in areas where victims could speak freely, without intimidation and fear of reprisal?

The last point would appear to be the case. An ethnic Tigrayan who had been hired by the team as a translator, but who was later sacked at the request of the EHRC, has described the environment as one dictated by the EHRC team. The EHRC – with all Tigrayan removed from its team – chooses places, interviewees, and questions. According to him, the questions were not designed to find out the truth but to support the position the EHRC had already taken.

In what looks like a contrived attempt to draw an equivalence between the genocidal forces and the Tigrayan forces defending their people, the Team seems to have gone on a wild goose chase in Bahir-Dar and other places outside Tigray to find a crime that could be blamed on the Tigrayan forces. A comprehensive investigation is to be appreciated, of course. But if the Team had the time and resources to investigate places where no atrocities have been credibly reported how is it that it was not able to investigate atrocities that have shaken the world?

But the most serious problem was the utter lack of seriousness in the statements. True, both the UNHCR and EHRC acknowledged that crimes have been committed, making sure to apportion blame to all parties. This, of course, is the narrative the regime wants to push. That it was dragged into a war, and as in any war, there were unfortunate casualties. If the regime was given a chance to investigate its own crimes, it would produce a result not far removed from hinted at by the statements from the Chief Commissioner.

What actually happened was forces, both Eritrean and Ethiopian, with genocidal intent, invaded Tigray and unleashed the kind of criminality a force with a genocidal intent would. There is nothing in the statements to indicate the magnitude of the crimes that have been committed against Tigrayans. Of course, the final result has not yet been published, but the tone of it has already been set and it is one that raises more questions than it answers.

If the joint investigation was for box-ticking purposes (it definitely is for the Abiy regime and the EHRC), then job well done, and congratulations are in order. The victims would, however, like to believe that the UNHRC was involved in the investigation in good faith. If that is the case, the Commissioner has a lot of questions to answer. The following questions are but a few:

The Commissioner should answer these questions in order for the families of victims, survivors, and the affected community to trust and accept the result of the investigation. After all, the main purpose of the investigation is to deliver justice to the victims. The minimum bar that such an investigation should clear is credibility among victims. Absent that, it does more damage than good. First, by minimizing and ignoring the horrors that have been visited on the victims, it will add insult to enormous suffering. Second, it will vindicate the genocidal forces’ initial conviction – that they can indeed get away with murder. Surely, the UN does not want to grant brutal regimes a license to kill their own citizens. It is in this spirit that the Commissioner ought to explain to Tigrayans why they should accept the result of her team’s investigation.

Wake up World: An Open Letter

The war on Tigray: glimpses of the destruction in Tigray