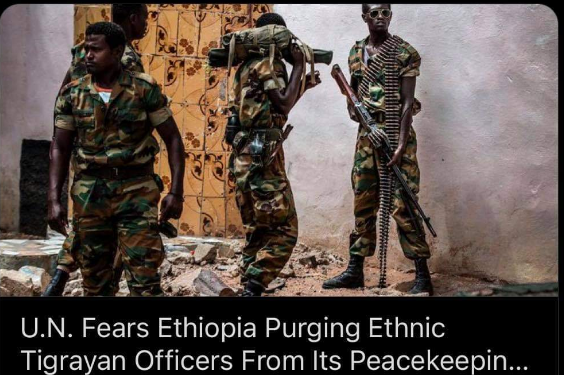 After Abiy Ahmed declared war on Tigray, life has not been the same for Tigrayans. There were reports of harassment, discrimination, and abuse of Tigrayans by government officials.

Tigrayan top military officers and members of the Ethiopian National Defense Force (ENDF) were not even spared. All ethnic Tigrayans who were serving ENDF have been disarmed, many of them are detained and unjustly imprisoned since the beginning of the war.

Many fear that they might be enduring torture at the hand of their capturers and held in dangerous conditions. Those who were concerned took their fear to Twitter, organized by @TigraiHub, and asked: #WhereAreTigrayanENDFs?

Since early November 2020, an estimated 17,000 Tigrayan Military Officials and members of the ENDF have been detained and are currently languishing in military concentration camps and detention centers. They were ethnically profiled and unjustly imprisoned. Their families have been in the dark for the past five months and they do not know about their whereabouts nor if they are safe and alive. According to credible sources close to Tghat Media, ranking officials are being isolated, subjected to torture, and some have been abducted and taken to Eritrea.

It is a norm that countries respect their army members regardless of their ethnic background. However, the Ethiopian government has used ethnicity to imprison army members. Ethnicity should not have been used as a criterion to imprison those who served their country but it seems it was part of the genocidal war and an extension of Abiy’s animosity towards Tigrayans.

Soon after the war broke, there were harrowing reports of how ethnic Tigrayans were profiled and fired from their jobs from the likes of Ethiopian airlines. Such practice included the federal police, national security, and intelligence.

The BBC has reported accounts of some who were detained and imprisoned at an order that came from the “top.” An ENDF soldier who served for 14 years said that “he and others were singled out because they were Tigrayan […] and were detained in a warehouse by his fellow soldiers with nearly 90 other Tigrayan members of the armed forces.”

The same report shows that some of the detainees are veterans and high-ranking military officials, including some who served in the African Union peacekeeping mission in Somalia. One of them, who had managed to escape, spoke to the BBC and said: “I had never imagined those people who had relentlessly served the national army and their country would be treated this way.”

So far, no one has come forward and inquired about the whereabouts of the detained Tigrayan ENDF members. No one has reported about the conditions they are in and their fate. Caught in the intentional confusion created by the Ethiopian and Eritrean governments, the detained Tigrayan ENDF members are essentially prisoners of war although without any of the rights and protections afforded to POW.

What is the demand?

Stressing the notion that army members should not be abused because of their ethnicity, the campaigners asked for immediate action to protect the vulnerable Tigrayan military personnel. They implored the international community including @amnesty, @hrw, @ICRC, and @UNHumanRights to request access to them; to investigate the unlawful detention, torture, murder; and, most importantly, to avert the unthinkable.

The treatment these members are receiving sends a signal which will ultimately affect the way this damned war will be resolved. It also complicates any possibility of ending the war using any peaceful means.

Suffering in Silence: An Insider’s Revelation of Being a Tigrayan Civil Servant during the War on Tigray

Assessing the impact of the war on Tigray: preliminary numbers from seven Weredas

Who Started the War on Tigray?