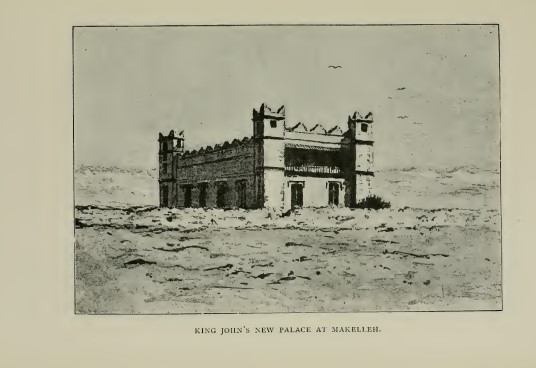 The palace of Emperor Yohannes IV found in Mekelle, Tigray is an important national landmark. The building was converted into a museum under UNESCO’s mission recommendation during the Derg era. Since then the museum has hosted several exhibitions and artifacts related to the emperor and his descendants. A rich ethnographic collection is also exhibited in one of the palace buildings. The palace is registered as a national heritage. After its recent renovation, it has the potential to be recognized as a World Heritage site for, along with other elements, Outstanding Universal Values and well-conserved remains of scenes of upheaval from 19th century Africa. This building and compound that have significant universal values have been compromised and become targets of attack in this conflict.

The architectural style of the palace is the Tigrayan style of grand Hidmo construction blended with  European wood carpentry. Emperor Yohannes IV assembled a diverse team of builders, artisans, and carpenters for this construction. Master traditional builders Bijerewend Desta Tekhele and Bejirewend WerkeKiristos Engda were invited from Wegrezghi  Debre Mihret Kidane Mihret Church and two Italian brothers called Yoseph Naretti and Goicom Naretti and four Moroccans worked along with the local builders. The special woodworks of the openings and throne of the Emperor that are subject to destruction now were made by the Italian Naretti brothers. Giacomo Naretti who worked in the Suez Canal construction was recruited by the mission of the emperor Yohannes IV who planned to bring professionals from Europe (London) for the construction of a railroad and telegram. His accounts of the journey and his service in the Emperor’s camp are detailed in the Naretti Diaries.  However, the trip was cut short in Egypt by the Cholera pandemic that struck Europe. The palace was built on elevated land called Meam-Anbessa (meaning resting place of lions) encompassed by May Liham river at the heart of a group of villages with vast grasslands known as Mekelle.

Emperor Yohannes IV that built the palace is remembered as a devout liberator who fought several anti-colonial wars during the scramble of Africa in the 19th century. In fact, he died on the field protecting the western front of his empire in a place called Metema-Yohannes that now bears his name. There are several memorials to the Emperor, from Yohannes Church in Addis Ababa to hundreds of churches he financed including in Jerusalem, as well as the places where he engaged in battle. However, The grand Hidmo palace of the Emperor in Mekelle is unparalleled as a living memory and manifestation to understand the history of Africa and its relation to Europe in the 19th century.

Locally the palace was the first major landmark in Mekelle city as the city developed into an imperial capital. Tadesse Siquar, who wrote on the establishment and development of Mekelle, highlights the importance of this landmark as a binding force encouraging cohesion in Mekelle city. The building of this grand palace inspired a generation of upwardly mobile builders and farmers to build houses in the grand Hidmo style. After the erection of the building, it was used as the main residence and public office of Emperor Yohannes IV and his descendants and relatives of including Leul Raesi Araya Sellasie Yohannes,  Leul Raesi Mengesha Yohannes, Leul Raesi Gugsa Araya Sellasie, Leul Raesi Siyoum Mengesh, Raesi Abraha Araya, Raesi Haile Selassie Gugsa and Leul Raesi Mengesha Seyoum, along with other notables who married into the family.

Most recently the building compound was under the management of the Federal office of the National Palaces Administration office. This is a federal government body that manages all federal and regional palaces. The two main historic buildings functioned as a museum hosting several cultural heritage articles.

Few other buildings have the power to tell the story of the formation of the modern Ethiopian state like this palace. During times of conflict, it was symbolically important and political leverage to conquer Mekelle and this palace specifically. This was shown during the two Italian invasions as well as during internal conflict in Ethiopia.

This tradition has continued in the current war being waged on Tigray but an entirely new and destructive dimension has been added. The destruction that has been wrought on this building, which was the administrative center of Tigray for over 130 years and unparalleled by public importance and symbolism, has paralleled the similar attacks on the more ancient religious sites like Axum, Debre Damo, and Nagashi that were targeted in this war as well.

After the breakout of the war on Tigray in November 2020, Mekelle was captured by Ethiopian forces on the 28th of November 2020. The occupation of Mekelle lasted until the end of June 2021 (28th June) when the Ethiopian army and allies fled Mekelle. Although there were informal reports as to the condition of the palace museum which was used as a military camp during this time, the complete picture of the damage and looting was not fully revealed until a video documentary of an investigation committee of experts visiting the site was broadcast by Tigray Television. This committee of experts was established by the Tigray State Bureau of Culture and Tourism to assess the damage to the museum following the liberation of Mekelle. Committee members included bureau experts, staff of the Emperor Yohannes IV museum, Mekelle Zone Administration, and Tigray Martyrs Memorial Museum ( another museum ransacked by the Ethiopian army).

Mr.  Yirga Asefa, a museums expert from the bureau, was one of the committee members who made the assessment. He spoke to Tigray TV describing the activities of the committee which included an on-site visit to the museum. He noted that the compound had been used as a military fort against international laws. The compound was littered with waste from the soldiers. He observed heavy trucks were parked in close and dangerous proximity to the palace. The signage of the palace was completely vandalized. He also noted that there are several cracks in the palace building as a result of the activities during the time of occupation.

Mr. Haleform Haftu (a local resident) who visited the museum after federal soldiers fled told Tigray television that the palace was used as a camp for the soldiers and completely damaged by them. He said ‘we can’t even call it camp. Camp is organized but this was worse than a donkey’s barn. Every place was converted to a dorm of the soldiers.’ Mr. Bethel Tsegay, a young local resident on Tigray tv recalls how the place was a tourist attraction and well maintained. He said after the war the museum is completely ravaged.

Mr. Mebrahtom GebreMedhin (Museum and heritage protection expert of the  Emperor Yohannes Palace Museum) said ‘we were not allowed to visit the site during the occupation time. But the same federal police officers were returned to look after the palace, those who were keeping it here. When we reached out to them to look into the museum, they told us everything was destroyed and there is nothing to visit. One day I was allowed to visit and it was rampaged as they said’.

Mr. Mebrahtom gives a detailed account of what happened to the palace museum when it was converted into a military camp by the Ethiopian army. The army used the palace building as a residence camp, arms storage, and barn for animals. One striking example is that the leader of the army in the camp moved into the palace with his family and his complete livestock. The upper floor of the drum tower was used as a residence while sheep, goats, and chickens were put on the ground floor. The walls were decorated for residence. Open fire kitchens were installed all over the compound. The old olive wood doors of the drum tower building were broken and damaged during moving in.

The palace museum of Emperor Yohannes IV is one of the many Tigrayan heritage and cultural properties targeted in this war. Cultural heritage was deliberately targeted for attacks, destruction, and looting in all parts of Tigray. The rehabilitation of the museum demands a lot of effort and resources. The professionals in Tigray Bureau of Culture and Tourism, Mekelle Zone, Martyrs’ Museum, and Tigray television did a commendable job in early documentation of the damage, particularly when there is a complete communication blackout on Tigray and other burning issues at hand. The rehabilitation of this important heritage demands collaboration from the international community. In general, the following things are demanded at this point.

The war on Tigray: glimpses of the destruction in Tigray