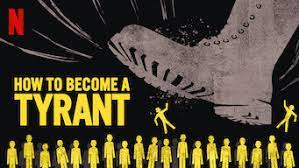 I recently stumbled upon a Netflix show entitled “How to Become a Tyrant.”

The show, in brief, is a satirical take on tyranny, hilariously narrated by Peter Dinklage, as he takes a look at various well-known dictators of the modern era, and how they came to be.  While watching the show, I thought it would be a fun exercise to do a little tyranny check for PM Abiy Ahmed, based on the checklist used by the show. (I urge you to do this fun exercise with other leaders.)

But first, let me share a few things I  learned.

Tyranny is not a one-size-fits-all recipe. There are at least two distinctive volumes to the book, or tyranny bibles if you will.

The first volume deals with the most obviously recognizable tyrant: The Book of the Feared-Tyrant.

The acknowledgment section of this book reads, “It’s my way or the highway.”  We don’t need to go further than the reign of Mengistu Hailemariam to find an example of this type of Tyranny in recent Ethiopian history  Prime Minister Abiy Ahmed doesn’t quite fit this mold. Let’s move on.

Then, there is the second volume. The one about the stealth tyrant: The Book of the Loved-Tyrant. On the entry page of that book, there is a one-liner that reads, “From the person of the people…”

Let’s put the PM to the test.

1. The Loved-Tyrant preserves the image of being a “Person of the people”

This is the foundation to being a Loved-Tyrant. Mohamed Qaddafi of Libya made a habit of staying in regular folks’ humble abodes whenever he traveled. Saddam Hussein went into poor people’s homes and practically stocked their fridges.

From his earliest days as premier  Abiy Ahmed ensured he was videoed and photographed in everyday contexts with regular people proving he is “one of us”. We were bombarded with images of him giving friendly massages, play-fighting, hugging, going on one-on-one push-up contests with regular folk; insisting on being in the driver’s seat as he showed foreign leaders around Addis.

There is even a video of him using local slang and calling a guy “Jezba”(translation: idiot) that has become a running meme.

Then again, politics is a fawning game and maybe the PM is just “cool” like that.

2. The Loved-Tyrant is an Orator extraordinaire

Hitler, a lowly reject who was eventually forced to join the army after his failed architectural dreams, was also arguably a very articulate and passionate public speaker. He moved millions and brainwashed them until each and everyone traded their humanity for his misguided and unfounded ideals, gobbling each word like he was the second coming.

Looking back to June 2018, when PM Abiy held his first public rally and the crowds that invaded Meskel square like ants on honey, I would have willingly given up my left arm to physically be present at that moment. I have since recovered from that madness.

Till today though, PM Abiy’s solution to every predicament seems to be giving speeches. When the recorded speeches of a country leader are being rented out parallel to blockbuster movies, that is when one needs to take a step back and ask the most important question: When is it coming to Netflix?

Then again, words are powerful. Maybe genocides and civil wars of times past have been averted with the right speeches at the right time.

3. The Loved-Tyrant is a direct descendant of Narcissus

When Saddam Hussein first came into power, he convinced the people of Iraq that going against him was tantamount to going against an omnipresent deity.

When young-soldier-Hitler’s was laying in a foxhole, the sole survivor when his contingent was bombed in the First World War, he claimed to have seen a white light that reminded him that he was meant for something bigger. It was that moment that fueled the madness that was the Third Reich.

I remember a speech PM Abiy gave during the early days of his reign. Paraphrased, it went along the lines of,

“I never allowed people to take pictures of me because I knew someday I would be king.”

Don’t get me wrong, I am a firm believer that each human is a walking oxymoron—We are all so ordinarily “Gifted.” We all have our passions. Still, there is a very thin line between passion and narcissism. That line to narcissism is crossed when one begins to believe the weight of the world is on one’s shoulder, and only one can save it.

Then again, narcissism can be subjective.

4. The Loved-Tyrant appeals to the backbone of a country: Women

Qaddafi was notorious for the innumerable women in uniforms guarding him. During PM Abiy’s reign, women in positions of power were all over  Ethiopia. Our president was suddenly a woman. (A possibility  that seemingly had never occurred to preceding leaders.)

Of course, being a woman myself, I am not averse to this development. Still, one can’t help but question if it was inspired by the genuine belief of women being capable leaders.

Then again, who cares how we got there, as long as we are there?

Hitler waged war on the Jews. Idi Amin waged it on the Asians living in Uganda.

As the strategic tyrant, one of the governing principles of a Loved-Tyrant is scapegoating.

In an Ethiopia drowning in floods of adversity from all directions, Abiy Ahmed decided to wage a civil war against one party – that was part of the previous coalition government – and by extension against an entire ethnicity.

In a country whose current status provides one with a menu of countless unsavory ways to die, somehow, the PM has managed to divert all anger and resentment towards the civil war, giving the people a common enemy to hate, meanwhile preserving his image as the loved savior. And you say magic doesn’t exist!

Then again, maybe the war was inevitable and the scapegoating was an unforeseen bonus.

6. The Loved-Tyrant doesn’t shy away from using the “Western media is against you” fact to serve his purpose

When Hitler was accused of running concentration camps and committing horrific atrocities against Jews that were happening behind a closed-off Germany, he convinced the people that the foreign media was against them. The grain of truth in that gave him the grounds to hand-pick a David Irving, a Holocaust-denying journalist, who gave Hitler the lee-way to pen and show the world, his own fairy tale about the lives of Jews in Germany.

Don’t get me wrong, I am just as tired as any other African, or anyone from a majority black country, of how foreign media keeps selfishly marketing us. But to take advantage of this reality to serve your purpose is another topic. When there is a grain of truth to something, it makes it easier to believe. That is why some conspiracies are so easily believable. Area 51, anyone?

The PM has denied foreign media access to the civil war in Tigray. News of the death tolls of civilians has been heard with little to show for it. The people in the war keep recounting gruesome stories, the western media claims the death tolls are more than reported, local media keep warning us of distortion and exaggeration.

At a time when information is at everyone’s fingertips, Ethiopians are the only ones forced to rely on hearsay.

Objective or not, western or local, the people of Tigray caught in the middle deserve to be seen and heard by someone. Anyone. Body counts need not be a guessing game.

Then again, maybe some wars are meant to be fought in the dark.

7. The Loved-Tyrant, during his prime, makes friends with other tyrants

Idi Amin became pals with Saudi Arabia during his prime, which paid off as it became his refuge when he had to flee. Our very own Mengistu Hailemariam still resides in Zimbabwe thanks to friendships built during his golden days.

Tyrants are no different than hibernating bears. They prepare for the winter because they know winter always comes.

As much I love my Eritreans, there is no denying their leader is a textbook, fear-mongering tyrant. The friendship or “bromance” between Abiy Ahmed and Essayas Afeworki, to me, seems more personal than a friendship between two countries. I would pay to be a fly in the room where those two casually hang out though. I have this image in my head that 90% of their conversation involves chewing out TPLF over coffee and popcorn.

Then again, what the personal friendship would brew, only time will tell.

8. The Loved-Tyrant is notorious for penning a “Dear, country” manifesto while in power

Considered to be one of the most terrible pieces of literature, “Mein Kampf,” penned by Adolf Hitler, was nothing short of a mad rant by a mad person confined inside a four by two. Still, the people of Germany at the time read it and believed it to be the love letter of Hitler to Germany. When Qaddafi was in power, “The Green book;” his brainchild, was part of the school curriculum and educators had to ensure that every child memorized it page for page.

Whenever I see the “Medemer” book by Abiy Ahmed (currently $49.19 on Amazon by the way), it gets me thinking.

Literature is a powerful tool. More powerful than tanks and nukes. Personally, I am a believer that the personal ideologies of a sitting leader compacted inside a book can easily be mistaken as an alternative to the constitution. How positive its message is beside the point. But that is just me.

Plus, as breezy as Ethiopia’s internal affairs were at the time of the book release, maybe the PM had some time to kill and wrote a book.

9.The Loved-Tyrant patiently waits his turn in the background of power

Stalin, Idi Amin, Gadaffi, Kim Jong-Un, all waited their turn like a wallflower.

PM Abiy was part of the former government. We can all recall how a series of unfortunate or fortunate (depending on how you look at it) events brought him to the forefront.

Then again, maybe he has paid his dues on his way up, being a soldier in the Ethio-Eritrean war and all. Moving on.

10. The Loved-Tyrant has great immortality projects

The grand finale of going through all this, for a tyrant, is his grand project: immortality. He can be left the space and freedom to weave his magic into the country as he saves it.  As his narcissistic self keeps telling him, only he can save his country.

Qaddafi had the Great man-made river project. Hitler’s mind was set on building a Germany that was to be back to its former glory.

From a subjective point of view, what I deem to be the immortal projects of PM Abiy might warrant an entire book. Regardless, whatever grand projects the PM had in mind, might just have been hitting their marks, because they have already garnered the leader of the presently least peaceful country, a Nobel Peace Prize. Irony? Is that you?

Then again, who doesn’t have immortality projects?

In conclusion, I, an Ethiopian, wouldn’t dare render the title of “Tyrant” to both Mengistu Hailemariam, and the current PM of Ethiopia alike. Because, I, yet another Ethiopian who is well-read on the “Dergue” type of tyranny know better. Still, maybe, just maybe, there may be that small chance the PM and I have been reading two completely different volumes.