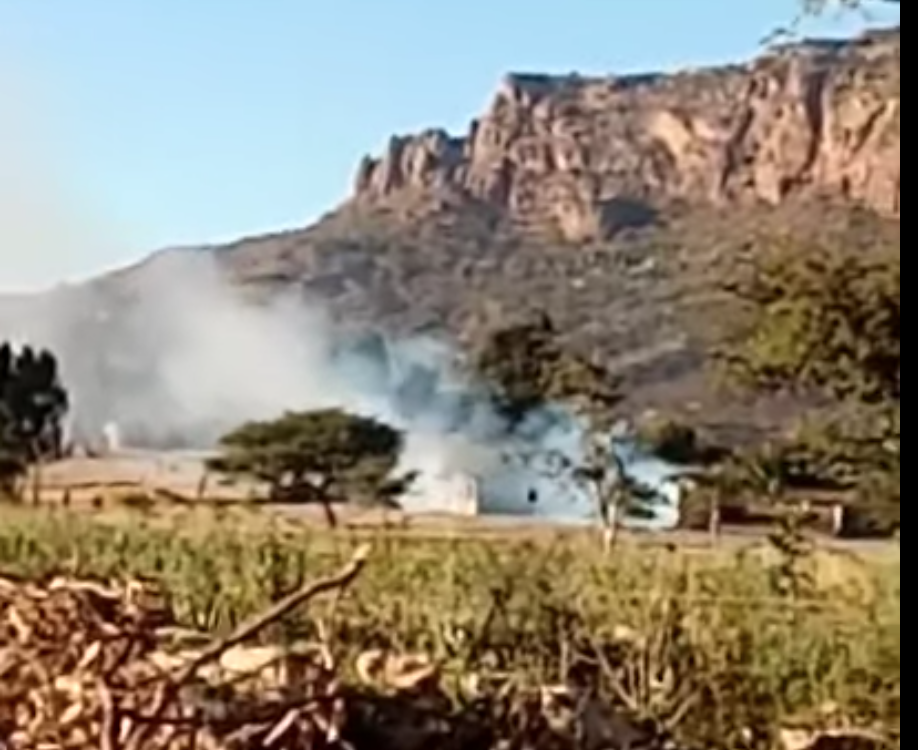 When the war on Tigray broke out, I was in Mekelle. When services were all shut down I decided to go, on foot (because there was no transport), to my family in Kilte awla’elo to minimize risk. It took me about 13 hours. There was no war or the sounds of war when I arrived. After a few days, however, heavy artillery fired from the direction of Sinkata started hitting the area. When they reached Hazien they shelled Gulle, Digum, and Abiyi Adi (not to be confused with Abiyi Adi of Temben) from afar killing animals and destroying houses and fields of crops. 10 animals were killed around our home. Then, On 23 November invading troops arrived through the Hawzien-Megab-Digum-Abiyi Adi road killing innocents, eating farmers’ animals, burning farmers’ houses, looting valuables and tools. Most of the soldiers were Eritreans. There was heavy fighting between Tigrayan and invading forces at Digum, Debre me’ar, Abiyi Adi, and Menda’e which lasted for two days and was helped by warplanes and combat drones. I saw at least a warplane and a drone.

When the invading forces enter the villages, the people fled to the mountains. The people stayed for four days in the mountains and valleys hiding. Children, elders, and pregnant women were hungry and thirsty, and in cold weather especially at night. When the invading forces arrived at Menda’e, they put a gun to my father-in-law’s head and shot him in front of my brothers-in-law and their mother. There, they also killed a teenager whom I know.

The fighting and shelling were so heavy that there was a cloud in the air causing rain the next day. The rain destroyed crops that were ready to collect, as people were not able to collect them.

The invading forces eventually moved towards Wukro where they caused huge destruction and massacres. Two weeks later, however, on 3rd January 2021, at about 07 AM Ethiopian troops came back to Gulle to kill and disarm militias. The local militias saw them, informed the people to flee and hide, and around 8 AM the militias engaged the invading forces killing many and wounding others. The Ethiopian troops called for reinforcement and three trucks full of soldiers and weapons arrived at Menda’e. The next day, the troops burned 9 houses in Menda’e.

The troops continued westward, towards Abiyi Adi, and Tigereda. They rounded up about 50 youth they met in the areas and kept them for five days ordering them never to sit but to stand. They also gave them no water nor food. Eventually, there was a debate between fluent Amharic speakers and some Oromo-accented speakers as to whether to execute them or to free them. Eventually, they were freed. The Ethiopian troops left, but they would come back for the third time.

On 18 January 2021, the  Ethiopian army came to Gulle for the third time. A few days before, they shelled the area from Arato (ዓራቶ) and Adinifas (ዓዲ ንፋስ). They arrived suddenly at Debre Tsion of Abiyi Adi (not to be confused with the Abiy Adi of Tembien) at 5 PM. They came from the Tsigereda-Ghere’Alta side. The people were caught by surprise. The soldiers began shelling Darna (ዳርና） mountain. This was to terrorize the people around. Peoples from Adimekeda（ዓዲመኸዳ） began fleeing along with their livestock to a nearby place called A’erug, Sluh（አእሩግ፣ስሉሕ. The people already knew about the brutality of the army against civilians because on the first two trips they had killed two civilians while in their home in the village of  Adimekeda, and they massacred more than 70 civilians at the nearby village of Gulsha（ጕልሻ).  With this knowledge, almost all villagers of Gulle fled.

The next day,  19 January 2021, was the religious festival of Timkat. The people of Gulle normally celebrate the festival in a nearby river where priests baptize the people with water and religious and cultural celebration is held. This year, the people did not celebrate it as they were fleeing and searching for safety.  In Gulle, Tusha (ጡሻ), the troops began entering houses and checking for valuables. They took some gold, silver, radio, solar panels, blankets, clothes, and even food items (Shiro, berbere, food oil, eggs, enjera, etc).

I was around the administration office of Gulle (ጕለ) when troops arrived.  From the troops, around ten soldiers came nearby where I was, the rest went to Adi Metere (ዓዲመጠረ) and Egamat（ዒጋማት). Four soldiers entered our house and took our solar panel.  After about 30 minutes, they went out of our house carrying my bag.  Later I found my clothes on the floor while my eyeglasses and my deodorant were stolen.  The soldiers went to the Gulle Administration Office, they broke in and took something covered in a white sack.  After a few minutes, they set the building on fire, as can be seen in the video below.

At the same time, I saw houses at Adi metere burning.  Four houses (Priest Aregawi, Gebretsadkan Tsegay, Gebremeskel Tesfay, Kidanu Tesfay) were burned down with all their properties, and continuous artillery sound was heard from there. Also around the same time, one civilian minibus was burned down by the soldiers around Egamat. As some soldiers were doing the looting and burning, others were slaughtering farmers’ goats, sheep, and hens as well as drinking all that was prepared for the Timkat festival.

As they moved into the villages looting and burning, they met a priest called Keshi Kidu on their way.  They beat him severely asking him to show them where the “Junta” were and to show them militia houses. The priest appeared to have lost consciousness for some time, but later he got up and they took him with them to Abraha we Atsbeha. He spent one night with them, on the next day they released him.

Let me take you back to my house. After I witnessed what they were doing, I came home and checked what they took. They stole two blankets,  solar panels, my father’s suit, my mother’s clothes, a radio, and food items. Everything in the house was vandalized and some things were thrown out. They also mixed our stored cereals.  For instance,  wheat and Taf (Teff) were mixed on the floor. The same kind of vandalization and mixing happened in almost every house in the village.

After some hours of roaming, burning, and looting, all the soldiers gathered at the Gulle Administration Office. Then they burned a nearby shop, a game station, and part of the administration office.

Getachew Abrha is a lecturer at one of the higher education institutions in Ethiopia.

Drones and Machetes: The Race towards more Death

A glimpse into the much-hyped food aid distribution in Tigray